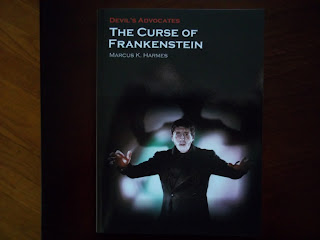 Auteur Publishing has started a new book series on famous classic horror films. One of the first entries covers THE CURSE OF THE FRANKENSTEIN, the seminal 1957 production which was the first color Gothic thriller released by England's Hammer Films.

It would seem that there is nothing more that really needs to be said about THE CURSE OF FRANKENSTEIN--the movie has been written about extensively over the years. Author Marcus K. Harmes explains in the book's introduction that he wishes to examine how the film was influenced by what came before it, instead of looking at it as a harbinger of English Gothic cinema to come. Harmes' main theme is that THE CURSE OF FRANKENSTEIN was a "transgressive adaptation"--in other words, not a faithful adaptation of Mary Shelley's novel or any other Frankenstein film made before, but an adaptation of many different themes and ideas.

Harmes spends a lot of time going over his transgressive adaptation theory, and because of this, parts of the book tend to be rather dry. Harmes does make some interesting points--he brings up the fact that almost all of Hammer's big-screen output was in some way an adaptation, or a remake, or a reboot, if you will (the author uses such examples as Hammer's Universal horror reworkings and their various theatrical adaptations of British radio and television programs). Harmes also informs the reader that even though THE CURSE OF FRANKENSTEIN was the first Gothic horror film for Peter Cushing, the actor had several years experience in period costume stories on the stage and on BBC TV, which certainly enabled him to fit into the story.

This is a very slim volume--it is only 100 pages long, and it's size is 5 1/2 X 7 1/2 inches. There are a few black and white stills from the movie sprinkled throughout the book, but if you are a major Hammer fan, you've no doubt seen those stills dozens and dozens of times before. This is a decent work, but there really isn't anything particularly earth-shattering here. I have to give credit to any writer who can spend a whole book discussing one film--but unless you are a rabid Hammer fan who buys everything connected to the company, you don't have to rush right out and buy this.
Posted by Dan Day, Jr. at 6:23 PM