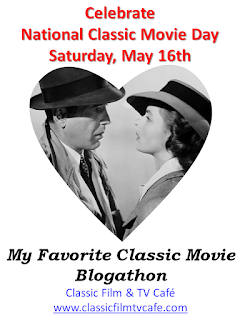 This post is part of the My Favorite Classic Movie Blogathon in celebration of National Classic Movie Day (May 16). To view the schedule listing all the great posts in this blogathon: http://www.classicfilmtvcafe.com/2015/03/a-blogathon-in-celebration-of-inaugural.html


Now....I know that some people will disagree with my pick for favorite classic movie of all time, for the simple reason that they don't think the movie qualifies as a "classic". Most would assume that classic automatically means "old". Well, we live in a world where a film like JURASSIC PARK is considered "old".....and this month will mark the 38th anniversary of the original release of my pick. That year, 1977, marked the 38th anniversary of another famous film's debut: GONE WITH THE WIND. So I would say that my pick deserves the recognition of "classic".

My pick is STAR WARS.

I saw STAR WARS during its original release, when I was eight years old.....at a drive-in, no less. I was obsessed with it even before I saw it, due to the Topps STAR WARS trading cards and the Marvel comic book movie adaptation. Everything about the movie intrigued me and fired up my young imagination. I saw STAR WARS at exactly the right age, and exactly the right time. Back then I certainly couldn't articulate what made me love the film so much. All I knew was that I wanted to spend as much time in this world as possible. At that point fairy tales and kiddie stories had not made much effect on me--but STAR WARS did.


STAR WARS got me interested in other science-fiction and fantasy films, and that led to my interest in classic horror films, and that led to my interest in classic films in general, and so on, and so on. All cinema is connected in some way--even if you try to just limit yourself to just one genre of film, or one director, or one actor, you will be exposed to many different types of movies. If I hadn't seen STAR WARS when I did, I think I still would have become a film buff in some way--I'm sure some movie would have come along and triggered my interest--but STAR WARS was the one that did.


STAR WARS--I'm talking about the whole saga now--has become a cultural phenomenon. It is now world-wide modern mythology. Everything about STAR WARS is so famous now that I believe the movie itself is somewhat taken for granted. THE EMPIRE STRIKES BACK may be the "better" film, but STAR WARS still holds up as a great film on its own.

STAR WARS moves fast--especially for a movie that came out in 1977. I love how the movie goes from one location to the other, constantly introducing new characters and new plot situations along the way. The movie doesn't stop to take a breath, and it doesn't stop to linger on the fantastic production design, either. We all know now how much George Lucas loves his CGI--but for the original STAR WARS the sets and settings have a reality to them that would be defined as a "used universe". That's what I really noticed as a kid when I saw photos from the movie in magazines and on trading cards. Everything looked like it really existed, and I had just never seen anything like it before. One must also remember that back in 1977 almost nothing about the STAR WARS universe had been explained yet. There were so many things going in in the first STAR WARS movie, and so many things that existed in the background....and they were just there. The movie didn't stop to tell you what was going on,....you were dropped into the middle of this galactic battle, and you just had to go along for the ride. Yes, there was that opening crawl, but that just gave a brief overview of the situation. Today's movies explain everything. The original STAR WARS explained almost nothing...and that just made it more fascinating.

Are the characters in STAR WARS generic? Well, yes, but that is what they're supposed to be. Young, naive farmboy....cocky star-pilot...beautiful feisty princess...strange old wizard....these are all archetypes, to be sure, but they are archetypes that people know and understand right off the bat. The acting in the STAR WARS movies never gets any credit at all, and George Lucas gets no credit for his direction of human beings, but you have to give props to Lucas for one thing....he picked the right combination of actors to portray these archetypes. You can call it luck (although Obi-Wan Kenobi doesn't believe in such a thing as luck), but if you recast even just one of the main characters in STAR WARS, the whole movie would come out very differently.

And let's not forget the main thing that intrigued me and so many other kids back in 1977: Darth Vader. It was the look of Vader, more than anything else, that made him so popular. Take the stature of Dave Prowse, and add the voice of James Earl Jones, and you have more than just a cool bad guy--you have one of the most iconic movie characters of all time. I can't even begin to tell you how much kids loved Darth Vader back in 1977. If you had any of the Topps Star Wars trading cards that had Vader's picture on them, it was like you were carrying gold around in your pockets. I'm proud to say that I wore the original Darth Vader Halloween costume in the fall of 1977.

And believe me, I had more Star Wars stuff than just a Halloween costume--I had the original Star Wars lunch box, the Star Wars Burger Chef movie posters, and the first Star Wars action figures (which actually didn't come out until 1978--but that's another story). Peter Cushing, who played Grand Moff Tarkin in the movie, wound up being my favorite actor of all time, and Carrie Fisher became one of my first crushes.

I could go on and on about STAR WARS (and if you read some of my other posts through the last couple years, you'll find that I have). I'm sure I've seen it about a hundred times, but I still love watching it. As a matter of fact, I viewed my DVD of the original version on May 4, Star Wars Day. This is the DVD that is non-anamorphic with sub-par sound & picture quality...but I still prefer it to the changed version on Blu-ray. Whether you like it or not, STAR WARS changed motion pictures forever, and it still affects the motion picture industry to this day. I love this movie and I always will. One of the greatest gifts that God has given us is out ability to use our imaginations. STAR WARS was the movie that unlocked my imagination. If I sound like a STAR WARS nerd, that is because I am--an original one.

And I wouldn't have it any other way. 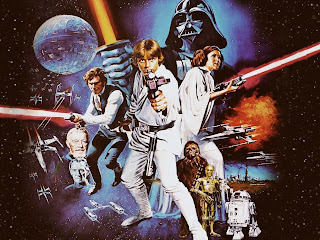