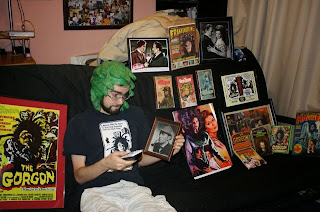 On this day in 1913, Peter Cushing was born. Tomorrow, May 27th, will be the 93rd birthday of Sir Christopher Lee. In honor of these screen legends I asked my good friend, independent filmmaker Joshua Kennedy, to contribute a guest post about his favorite movie of all time--THE GORGON, released in 1964 from Hammer Films, directed by Terence Fisher, and starring Cushing & Lee.

Let me begin by saying that everyone has their personal favorite film: a film that is special only to them, no matter how bad or cheesy it may be to others. This one is mine. The film THE GORGON is synonymous with the name Joshua Kennedy. It is so ingrained into my soul that it is near on impossible to separate the film from the man, or the man from the film, and thus, I shall do my very best to write as objectively as possible.

In 1964, the British film company Hammer Films had exhausted their line of movie monsters, achieving success with their earlier adaptations of Frankenstein, Dracula, The Mummy, and the Wolfman...but now they longed for something new. After placing an ad in the newspapers calling for ideas from Hammer fans, they soon received an idea that mixed familiar Hammer ingredients with Greek mythology. The story was submitted by J. Lewellyn Devine, and it soon became the foundation for THE GORGON.

The story involves the German village of Vandorf, and its nearby Castle Borski, being haunted by the spirit of Megeara, "one of {the} three sisters known as gorgons" who were so hideous that any one who looked upon them were "petrified". Barbara Shelley as Carla Hoffman tells us "The proper term is 'Gorgonized' which literally means turned to stone."

Megeara begins attacking the citizens of Vandorf, and when a few outsiders begin to investigate, they find that all is not what it seems as the village appears to be hiding something about the monster.

THE GORGON is considered the last of Hammer's "Golden Era" of Gothic films, mainly because of their move from Bray Studios soon after this film to the much more spacious Elstree Studios. In addition, THE GORGON is blessed with two dynamite performances from both Peter Cushing and Christopher Lee. It is the only time where their usual niche roles of Cushing being the good guy and Lee plying the monster are switched as Cushing plays the cold Dr. Namaroff, and Lee the warm and sarcastic Professor Meister.

Richard Pasco and Barbara Shelley play the doomed lovers, Paul Heitz and Carla Hoffman, and they are truly a sight to behold for the roles in the hands of less talented performers could have easily swayed into overacting. Pasco and Shelley, however, both maintain a heightened realism keeping in the tone and feel of the film.

Barbara Shelley, I might add, was my first on-screen crush, followed soon after by Martine Beswicke.

Many critics and Hammer fans have criticized the film's glacial pacing in regard to actual on-screen attacks from the monster, and this is very true. Looking past the modern tendency toward an explosion every two seconds, THE GORGON is still slow when compared to some of Hammer's earlier films like THE CURSE OF FRANKENSTEIN and HORROR OF DRACULA. THE GORGON, however, is not meant to be a monster movie; it is meant to be a love story, not unlike that of Romeo and Juliet. It is this fact that obviously led to its poor box-office receipts in 1964, and its constant overlooking in many fans' eyes.

I remember being five or six and already a huge Medusa and Hammer films fan, staying up late that fateful night to watch this movie. The first fully lit shot of Megeara frightened the daylights out of me, so much so that I quickly woke up my Dad to comfort me. On the screen was the personification of a child's fears: an elderly witch smiling devilishly from behind a hair of writhing snakes.

When watching the film at Monster Bash this past October (on its 50th anniversary AND with Dan Day Jr. as well!) this shot gathered laughter from the audience, and it's not hard to see why--the snakes are laughably rubber, and matters are not helped by the fact that poor Prudence Hyman is standing in a blinding light unable to hide the falsity of her costume.

The imagination of a six-year old boy saw none of that. My mind was so incredibly entranced by that shot and this film that the world of Vandorf is one that I am always enthralled to return to every time I watch it.

The irreparable harm this film has caused me is incalculable...but here are three examples:

1. I'm sure a day doesn't go by when I quote some obscure line from the film; this is mostly due to the fact that as a boy I recorded the entire soundtrack onto my handy tape-recorder, named Carla of course (!), and listened to it nightly as I drifted to sleep.

2. My Dad and I adapted this film for the community stage where we played the Lee and Cushing roles respectively, when I was 10 years old (!). The play ended with the head of Megeara, which was on wires, flying over the heads of the audience.

3. As I have begun making films of my own, I have always found a moment to pay homage to THE GORGON, if by a similar camera angle or a line of dialogue.

Sigh. I love this movie. For those who haven't seen it, I think you should give it a shot.

To quote Cushing in CAPTAIN CLEGG, 'There is nothing I like more than talking about myself...." and /or my love for classic horror so I would like to thank my good friend Dan Day Jr. for obliging me. 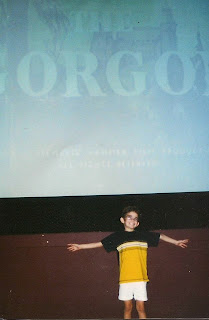 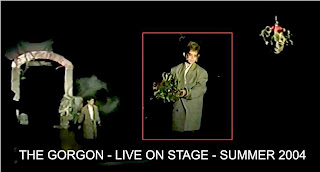 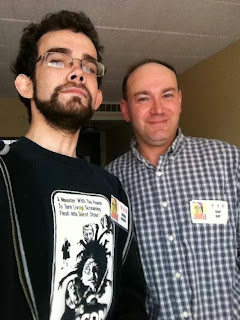 Josh Kennedy and I in our hotel room at Monster Bash October 2014 getting ready to go down and watch THE GORGON....it was such a momentous occasion for Josh he demanded we pose for a picture!!