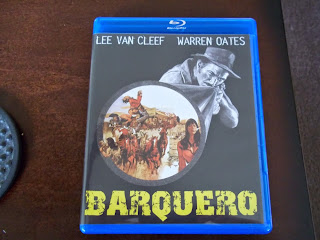 If you have been reading this blog you know that I am a huge Lee Van Cleef fan. I had never seen BARQUERO, and I had always assumed that it was a true Spaghetti Western--but it's not. The movie was an American production, shot in Colorado. BARQUERO tries to be just like a Spaghetti Western, but it doesn't quite get there.

The movie opens with a rather large group of bandits (there seems to be about a hundred of these guys) laying waste to a small town and killing all the citizens. The bandits are led by a vicious man by the name of Jake Remy (Warren Oates). Remy's real reason for attacking the town was to steal a huge cache of rifles. Remy intends to take these rifles and his men and cross into Mexico, to start a new revolution.


To get to Mexico Remy and his gang have to cross the river. They have to use the only barge within miles, and that barge is run by the mysterious Travis (Lee Van Cleef). Needless to say, Travis is not too happy with the idea of a bunch of bandits taking over his property, and the "Barquero" decides to put up a resistance.

The idea of a barge being the main plot point in a Western may seem silly to some people....but think about it: back in the 19th Century, if you had to go over a large river, and there were no bridges around, how would you do it? A small settlement has been built around the barge crossing, and Travis ferries over the settlers to the other side before Remy and his men arrive. The settlers (who sort of look down on Travis in the first place) want to get back to their homes and property, and they try to convince Travis to either give in to Remy or make a deal with him.

Of course Lee Van Cleef isn't about to give in to anyone for any reason. The character of Travis is a lot more working class than the Colonel Mortimer type of role Van Cleef usually played around this time. Travis is a taciturn loner, his only friend being Forrest Tucker's mountain man. Travis goes out of his way to protect the settlers and fend off Remy's gang, but it seems the real reason he is doing this is just pure stubbornness rather than a sense of doing good.

Warren Oates was a fantastic character actor, and here in this movie he is incredibly mean & cruel. Remy spends a lot of time smoking marijuana, and having flashbacks--kind of like how Gian Maria Volonte's character acted in FOR A FEW DOLLARS MORE. Remy acts more and more mentally unbalanced as the story goes along, to the point where he almost seems comic. Remy's main lieutenant, a French veteran of Maximilian's Mexican occupation army, is played by Kerwin Mathews, who I will always think of as Sinbad from THE 7TH VOYAGE OF SINBAD. Mathews is very good in what is an unusual role for him.

The reason Remy gets to spend so much time smoking weed and hallucinating is that for most of the film Remy and Travis are at opposite sides of the river, waiting for the other to make some sort of move. BARQUERO is about 110 minutes long, and that's way too much of a running time for this sort of material. There are a couple of sub-plots to fill things out, including Mariette Hartley as a settler who offers herself to Travis if he saves her husband, who has been taken hostage by Remy's men on the other side of the river. The sub-plots just delay the final showdown, and after the final scene, you will probably say what I said..."Why didn't Travis just do that in the first place?"

BARQUERO was directed by Gordon Douglas, who is best known for making several Frank Sinatra movies in the 1960s. Douglas had actually made a very underrated, and very violent Western named RIO CONCHOS years before, so he certainly knew his way around the genre. BARQUERO isn't bad...it just doesn't have enough in it to make it particularly noteworthy. As stated before, it tries to pattern itself on the Spaghetti Westerns, but it isn't flamboyant enough to be considered part of that class.

The real reason to see BARQUERO is to watch Lee Van Cleef and Warren Oates. Both actors had spent several years playing bit parts in various movie & TV Westerns--if BARQUERO had been made 10 years earlier, Van Cleef and Oates would have been members of Remy's gang, and they would have been killed off halfway though the film. It's nice to see them get the main roles and oppose one another--but because both men are on different sides of the river throughout the movie, they never appear in the same scene face-to-face!

One more thing I must mention. While the visual quality of the movie is fine, the sound mix makes certain dialogue passages hard to hear--and unfortunately there are no subtitles. The only extra is an original trailer.