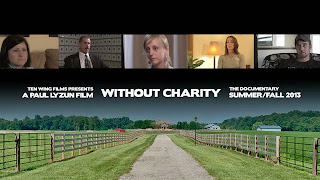 NOTE: In the interest of full disclosure, I must reveal that Paul Lyzun is one of my best friends. Nevertheless, this is my honest appraisal of his film.

On September 14, 2000, three men who were working on a barn near an upscale rural home outside of Lakeville, Indiana were murdered during a botched attempted robbery. The crime shocked Northern Indiana, and the case became even more notorious due to a young woman named Charity Payne.

Director Paul Lyzun's documentary WITHOUT CHARITY examines the case through Payne, who was accused of having told the men who committed the murders how to bypass the security system at the house (the family of Payne's former boyfriend lived at the residence). Despite Payne's testimony that she had no idea what was going to happen, the woman was convicted and sentenced to 165 years in prison.

The ramifications of the case--and the effects it had on the families and friends of those involved--are covered through numerous interviews. Police and law officials from St. Joseph County are asked about their decision to charge Payne, and members of each of the three murder victims' families are allowed to express their feelings. Charity Payne may be the main focus of this film, but the director makes sure that the viewer realizes that three men lost their lives in a horrible and senseless manner.

Payne only served seven years of her sentence before it was overturned--and that decision brought out a whole new series of questions and controversies, which are examined in a straightforward, even-handed manner. This is a riveting documentary, but it is not an easy one to watch. At the end there is no sense of justice, or triumph, or even closure....there is only a set of unanswered questions, which thankfully the director does not try to answer for the audience. These unanswered questions will remain in the viewer's memory long after the film has been seen.

For more information on WITHOUT CHARITY, please visit http://withoutcharity.com/
Posted by Dan Day, Jr. at 5:48 PM