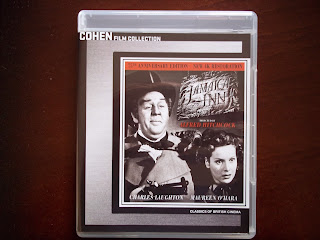 A couple years ago, I raved about the Cohen Media Group's Blu-ray release of the Douglas Fairbanks silent epic THE THIEF OF BAGDAD. Now Cohen has come out with a stunning restoration of one of the most obscure Alfred Hitchcock films, 1939's JAMAICA INN.

Whenever I have tried to watch JAMAICA INN before on television, I have never been able to get through it--mainly because the sound & picture quality was so bad. This Blu-ray looks and sounds light-years better than any previous version of the movie shown. The actual movie itself may not have improved, but at least Hitchcock fans will be able to view a outstanding version of it.

JAMAICA INN was the last film Hitchcock made in Britain before going to the United States and signing a contract with producer David O. Selznick. Hitchcock was asked to direct the film by star and co-producer Charles Laughton. The story is an adaptation of a novel by Daphne Du Maurier (Hitchcock would later adapt her writings in REBECCA and THE BIRDS). JAMAICA INN is a period melodrama set in early 19th Century Cornwall, England, about a band of murderous smugglers. It is not typical Hitchcock material and JAMAICA INN is not a typical Hitchcock film.

Maureen O'Hara (in her first major film role), plays a young Irish lass named Mary who travels to Cornwall, and the Jamaica Inn, to live with her maternal aunt and uncle. Mary finds out that her Uncle is the head of the smugglers....but the real brains behind the operation belong to the local squire, Sir Humphrey Pengallen (Charles Laughton), who controls the bandits in secret.

JAMAICA INN is more a Laughton film that a Hitchcock film. Laughton was one of the great all-time screen actors, but there were times when he could just get too hammy--and this film is one of those times. Not only is Pengallen a bad guy, it is hinted at in the film that he is going mad....and that gives Laughton all the excuse he needs to deliver a rather florid performance. As Pengallen Laughton is fitted out with fake eyebrows and what looks to be a fake nose. He dominates every scene he is in, complete with all sorts of bizarre physical mannerisms and line readings. The fact that Laughton was the co-producer of the film might be the reason why Hitchcock let the actor go all out....but the two did not get along too well during the shoot, and since the actor was the co-producer, the director may have not felt like arguing with him.

The rest of the cast (especially the smugglers) seems to have taken Laughton's lead, acting-wise. Nearly every other character is "colorful"--so much that it is hard for a viewer to identify with any of them. If there is a "normal" person in the film it is Maureen O'Hara. Only 19 years old at this time, she's exquisitely beautiful, and she already shows some of the feisty attitude that would become her trademark during her later years in Hollywood. O'Hara was in JAMAICA INN because she was under personal contact to Charles Laughton--when Laughton went to America to make THE HUNCHBACK OF NOTRE DAME for RKO, he took O'Hara with him, and the rest is movie history.

Robert Newton, whose most famous role would be Long John Silver in Disney's version of TREASURE ISLAND, plays the nominal hero, even though the script doesn't give him much of a chance to do anything heroic. Newton is rather bland here, which is hard to believe if you've seen him chew the scenery as Stevenson's famous pirate.

There isn't really much story--or all that much suspense--in JAMAICA INN. At 99 minutes the film has a tendency to drag a bit, especially when Laughton is not on the screen. The audience finds out very early that Laughton is the main villain, which negates whatever suspense the story might have had. The opening sequence, which shows the smugglers luring a ship onto the rocks during a storm and then killing the crew and stealing the cargo, is done very well and is the most "Hitchcockian" thing in the whole production.

The one thing JAMAICA INN does have is atmosphere--one just wishes it had even more of it. The area around the inn, and the inn itself, looks as if it belongs in a classic Universal horror film (this is a black and white film, by the way). The settings are dark and dreary--there doesn't seem to be a ray of sunshine in all of Cornwall. Unfortunately there are a lot of interior scenes in JAMAICA INN, and they do not take advantage of the oppressive settings of the surrounding landscape. (Everything in the film, believe it or not, was shot in a studio--even the shipwreck sequences.)

The real reason that JAMAICA INN does not rank with the best of Hitchcock's work may be that the director was already mentally preparing to go to America. If Hitchcock had initiated the project on his own, he would have been far more involved in the script, and he would have brought out more of those elements which fitted his cinematic personality. JAMAICA INN is not a terrible film, but it's not a classic, either. The film's real notoriety lies in its director and young leading lady, and the extravagant performance by its star. (You know who would have been the perfect director for this film? None other than James Whale. He would have really gone to town with all the eccentric English personalities.)

As I said at the beginning of this blog, JAMAICA INN looks magnificent on this Blu-ray--the disc really brings out the cinematography, production design, and the costumes. The Blu-ray features a short talk on JAMAICA INN with author Donald Spoto, who has written a number of books on Alfred Hitchcock (and I own most of them). There is also an audio commentary by film historian Jeremy Arnold, which is very thorough and very informative (Arnold likes the movie very much).

Cohen has done a excellent job with this Blu-ray, and I'm anticipating what they will be releasing in the future.
Posted by Dan Day, Jr. at 7:07 PM