THE OSTERMAN WEEKEND On Blu-ray 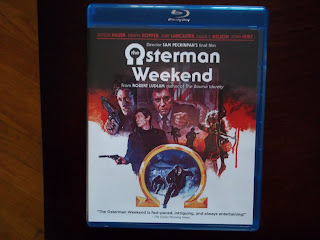 THE OSTERMAN WEEKEND is adapted from a novel by the same name, written by Robert Ludlum. (I read a lot of Ludlum books when I was younger, but the one this movie is based on I have not read, so I do not know how much it and the film have in common.) The story concerns John Tanner (Rutger Hauer), a investigative TV host who is informed by a mysterious CIA agent (John Hurt) that three of his closest friends are actually spies for the Soviet Union. The agent coerces Tanner into allowing the CIA to set up his house with audio & visual surveillance equipment for an upcoming get-together with the accused three. What follows is a complicated plot featuring lies, secrets, betrayals, and John Tanner winding up having to figure out how to save the lives of his family.

THE OSTERMAN WEEKEND isn't on the same level as Peckinpah's earlier films, but it is a rather intriguing thriller, with an excellent cast. Tanner's three friends are played by Craig T. Nelson, Chris Sarandon, and Dennis Hopper, and Burt Lancaster portrays the Director of the CIA. Hutger is fine in what is a very unusual role for him--a "normal" character (if you can call a famous tabloid journalist "normal"). The real acting honors are taken by John Hurt as the CIA operative Fawcett. Hurt's character is the one who sets everything into motion, and as the story goes along the more and more mysterious (and unnerving) Hurt acts. Without giving the plot away there is a reason why Fawcett acts the way he does...which gives the audience a unique understanding into the man's mind.

THE OSTERMAN WEEKEND does not have as many action sequences as one would expect in a Peckinpah film, but there is a true great one--a finely edited showdown at the Tanner family pool involving guns, gasoline, and bows & arrows (!). The movie is more a psychological thriller than a pure shoot-em' up. The themes touched upon in the film--government surveillance of private citizens, media manipulation, and the extent of which technology intrudes upon our lives--makes THE OSTERMAN WEEKEND feel more like something made in the 21st Century instead of something made in the 1980s. I'm no fan of reboots and remakes, but I'm really surprised this title has not been redone yet. All you would have to do is change the three friends to being suspected of helping terrorists, and update the technology involved in surveillance, and you've got yourself a story.

The main extra on this Blu-ray is a feature-length documentary on the making of the film called ALPHA TO OMEGA. Once again, we find out from the producers of THE OSTERMAN WEEKEND that Peckinpah caused problems and was eventually taken off the production before the final cut. THE OSTERMAN WEEKEND would be Sam Peckinpah's final theatrical film as a director (he would die in 1984). Several members of the cast and crew are interviewed as well. The disc also features a commentary with Nick Redman, Paul Seydor, Garner Simmons, and David Weddle--these men have done commentaries for nearly every Peckinpah movie on home video, and they once again come through with an enlightening and informative effort.

THE OSTERMAN WEEKEND isn't THE WILD BUNCH, but it is a very effective mystery-thriller, and because of the elements of the story it plays better today than it did when it was first released. Sam Peckinpah's final film may not be a popular classic, but it is in no way an embarrassment, either.