DONOVAN'S BRAIN is another one of those 1950s sci-fi movies I'm sure I saw for the first time on Svengoolie's show back in the 1980s. The title has just been re-issued on home video by Kino under their Studio Classics line (I bought the DVD version.)

The movie is based on the novel of the same name written by Curt Siodmak. The novel had already been adapted to the screen by Republic Pictures under the title THE LADY AND THE MONSTER in 1944, and Orson Welles starred in a radio adaptation around the same time. Siodmak's work would be translated to film yet again in 1962. Mind you, these are just the official adaptations--DONOVAN'S BRAIN has influenced untold numbers of science-fiction/horror tales for the big and small screen. Siodmak's novel has had a major impact on the entertainment industry (whenever you see a human brain sitting in a fish tank, hooked up to electrodes--well, that's basically taken from Siodmak). .

DONOVAN'S BRAIN is considered to be the best and most accurate version of Siodmak's story. Dr. Patrick Corey (played by Lew Ayres) has a small laboratory in his secluded home, where he experiments with the brains of monkeys. A nearby plane crash gives Corey the opportunity to keep alive the brain of one of the victims of the crash, ruthless financier Walter Donovan. Donovan's brain not only continues to function, it grows more powerful as well. It soon takes over the mind of Dr. Corey, forcing Corey's wife (Nancy Davis, aka Nancy Reagan) and his assistant (Gene Evans) to try and stop Donovan's malignant influence.

Judging from the story's synopsis, one would think that this film is a lot of hooey, but DONOVAN'S BRAIN is actually one of the better sci-fi flicks of the early 1950s. Felix Feist directs the film in an understated, down-to-earth manner, and Joseph Biroc's cinematography has an almost noir-ish sensibility. Lew Ayres gives an excellent performance, subtly presenting how Donovan's mind has slowly taken over Dr. Corey. Ayres is really doing a Jekyll-and-Hyde act here, but he doesn't overdo it--and that makes Corey's plight all the more believable. The fine character actor Gene Evans gives another one of his realistic portrayals (watch just about any TV show from the 1950s and 1960s and you're bound to see Evans turn up), and Nancy Davis is very good as Corey's loyal wife. Many have tried to use a title like DONOVAN'S BRAIN and link it to the second Mrs. Ronald Reagan in an effort to disparage both the movie and the woman, but I doubt most of those who do so have even watched the picture.

What also gives DONOVAN'S BRAIN a more "normal" feel is the fact that the mind of Donovan isn't out to control the world--he (or should I say "it"?) just wants to continue to get rich. It's an intriguing concept--a supposedly dead man wants to prove wrong the old adage of "You can't take it with you.". That's far more creative than the usual thirst for power or killing for killing's sake that one often sees in this type of production. 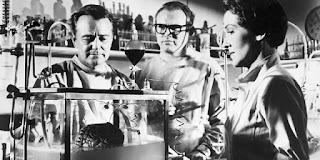 Kino's home video release of DONOVAN'S BRAIN features a new audio commentary by Richard Harland Smith, who has written several posts for the TCM website's "Movie Morlocks" blog. Smith does a fantastic job, giving all sorts of pertinent details on the movie and the entire "brain in a tank" genre overall. Smith informs us that Curt Siodmak was actually supposed to have written and directed this production, but he fell afoul of the producers. (If you are a monster movie fan and have read any of the several interviews with Curt Siodmak, you'll probably understand why he was taken off this movie--the guy didn't seem to have a good word for anybody.) Smith makes a very good point in comparing the relationship between the characters of Lew Ayres and Gene Evans in DONOVAN'S BRAIN with that of the characters played by Peter Cushing and Robert Urquhart in THE CURSE OF FRANKENSTEIN. (Let's face it, anybody who mentions Peter Cushing in an audio commentary is gonna get a thumbs-up from me.)