Not too long ago I wrote a post about an issue of the Official John Wayne magazine that ranked each one of the Duke's movies in order of quality. The lowest-ranked film in which Wayne played the lead role was THE CONQUEROR (1955), a production which has a horrible reputation. I stated that THE CONQUEROR really wasn't that terrible...I've seen plenty of movies that were far worse. To me, the worst sin a movie can commit is to be boring. THE CONQUEROR is strange, outlandish, and sometimes unintentionally funny...but at least it's not boring.

The reason I have THE CONQUEROR on DVD is that it is included on a set of Wayne movies I own from Universal called "An American Icon: John Wayne". There are 5 films in the set: SEVEN SINNERS, PITTSBURGH, THE SHEPHERD OF THE HILLS, JET PILOT, and THE CONQUEROR. This has to be one of the most haphazardly put together movie sets of all time--the first two films I listed feature the Duke co-starring with Marlene Dietrich, and THE SHEPHERD OF THE HILLS is a very underrated folk tale in which Wayne appears with Harry Carey. In my estimation JET PILOT is even worse than THE CONQUEROR, because JET PILOT is simply as dull as old dishwater.

As for THE CONQUEROR, all you have to do is say "John Wayne plays Genghis Khan", and that about sums up the entire picture for most people. THE CONQUEROR has long been considered one of the worst movies ever made--when the Medved brothers came up with their series of "Golden Turkey" bad movie books in the 1980s they excoriated THE CONQUEROR. The movie is even more notorious for possibly contributing to the deaths of most of the cast & crew.

Obviously a Hollywood production couldn't have been filmed in mid 1950s Mongolia, so the land of Genghis Khan was recreated using locations in Utah. These locations happened to have been downwind of nuclear tests conducted in the neighboring state of Nevada, and in later years several members of crew of THE CONQUEROR--including director Dick Powell, Wayne, Agnes Moorehead, and Pedro Armendariz--contracted cancer. It has never been 100% proven that the Utah locations caused these various cancers, yet the amount of people on the film affected can't help but lead one to believe that there has to be a connection. 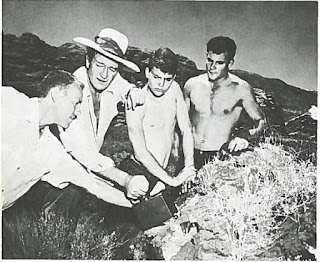 
Why did Wayne even agree to make something like THE CONQUEROR in the first place? According to Michael Munn's book JOHN WAYNE: THE MAN BEHIND THE MYTH, the actor was under contract to RKO Pictures, then owned by Howard Hughes. Wayne still owed RKO one more film, and somehow the Duke saw a script for THE CONQUEROR, and agreed to do it. Apparently Wayne felt that playing Genghis Khan would be a chance to do "something different"--and he was certainly right about that.

Making the filming of THE CONQUEROR even more taxing was that it was the directorial debut of actor Dick Powell. The movie had a huge budget, and it was shot in color and Cinemascope. It was intended to be a big, sprawling historical epic.

Whenever I read someone carping about THE CONQUEROR, I have to wonder if that person has actually sat through the entire film. I recently watched it to prepare for this post.

The first thing one sees is the famous RKO logo, in color and widescreen (which is very strange, especially for movie buffs). The movie starts out with an opening text crawl which says that even though this is fiction, it is based on fact. (I guess this was added to fend off all complaints over how unhistorical the movie is.) The title of the movie is something of a misnomer--the story is set before Genghis Khan makes all his major conquests (he's referred to throughout the film by his actual name, Temujin). Temujin and his blood brother Jemuga (Pedro Armendariz) come upon a caravan transporting the daughter of a Tartar chief named Bortai (Susan Hayward). Temujin decides to take Bortai for his own, resulting in war between the various surrounding tribes.

As Temujin , John Wayne is fitted out with a wig, mustache, and swarthy makeup, as is just about the rest of the entire cast. Agnes Moorehead plays Temujin's mother, and she's almost unrecognizable.  As for Susan Hayward....she looks just like Susan Hayward (complete with 1950s hairdo). While watching THE CONQUEROR you can't help but wonder if Hayward had been a companion of Doctor Who and been abandoned by the Time Lord in this period of Earth history. As you can see by the poster below, Hayward resembles a 20th Century chorus girl instead of a 12th Century Central Asian woman. Did Hayward refuse to be heavily made up--or did Howard Hughes, with his appreciation of the female form, want Hayward to remain as glamorous as possible?

Hayward spends most of the movie fending off Temujin's advances, but toward the end of the film she inexplicably admits she loves him and goes out of her way to help him. I have a feeling that the Temujin-Bortai relationship was influenced by the onscreen pairing of John Wayne and Maureen O'Hara. (Wayne even gets to say a variation of his famous line "You're beautiful when you're angry"--here it's "You're beautiful in your wrath".) The problem is that while the Duke and Maureen had real chemistry, he and Hayward have none--almost every closeup of the actress shows her giving the same surly look. Hayward spends the entire movie in a ticked-off mood--I'm sure she wasn't too happy about playing this role. 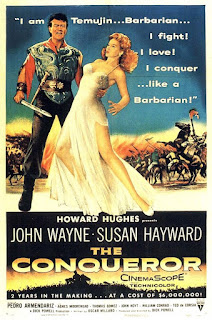 What really hurts THE CONQUEROR is the stilted dialogue. According to Michael Munn's book, screenwriter Oscar Millard had written the film for Marlon Brando, but it's doubtful that any set of actors could have made it work. The dialogue is in the style of what I call "Hollywood Historical Epic-speak". It's the type of speech that no one would actually say in a real situation. American actors in particular are not adept at reciting this type of script (which is why you see British actors constantly being used in historical epics). There are no actual conversations in THE CONQUEROR--everyone makes declarations instead, and most of them are rather florid.

Another major lowlight of THE CONQUEROR is a lengthy dance sequence (you read that right) featuring dozens of scantily-clad harem girls. (Did Dick Powell think back to his days as a Warner Bros. musical star while filming this?) At the end of it, Susan Hayward gets up and decides to do her own dance routine--all the while still having that same surly look on her face.

I do have to give Dick Powell credit...as a director on his first big-time film, he did the best with what he had. Powell used the widescreen ratio well, and he keeps the story moving. The action scenes are well staged, and there are several impressive horse stunts. I'm no expert on ancient Mongolian culture, but the tribal villages and costumes seem authentic. The music score by Victor Young is fine.  If actual Asian actors had been cast in this film, and the dialogue had been less chunky....this movie might have worked.

I have my own theory on how this movie could have really worked. It should have been made as a silent film. Of course, there's no way this would have been done, but think about it....if you take away the goofy dialogue, and focus on the visuals, THE CONQUEROR isn't half-bad. John Wayne still would have been badly miscast, but at least he wouldn't have sounded as silly as he does.

THE CONQUEROR proves that even the greatest of movie stars can make huge mistakes. I'm not trying to say here that this movie is some sort of underrated classic....but I am saying that movie buffs and Wayne fans should at least try to see it once, for curiosity's sake. Sometimes movies that don't work are more interesting than movies that are successful.

I'll end this post by using a John Wayne quote on THE CONQUEROR from Michael Munn's book. "The message is, don't make an ass of yourself by trying to play parts you're not suited to."
Posted by Dan Day, Jr. at 9:55 AM