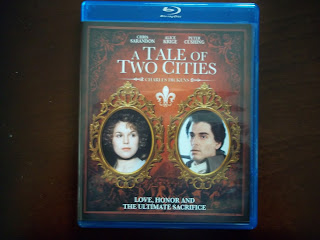 One would assume that after the huge success of STAR WARS, Peter Cushing might have gotten the opportunity to work on any number of enticing projects. But that simply wasn't so. Most of the films Cushing worked on after STAR WARS and before his mid-1980s retirement are either almost impossible to find and/or impossible to sit through--titles such as HITLER'S SON, MYSTERY ON MONSTER ISLAND, and BLACK JACK. The actor contributed to this situation himself due to some of his own decisions--Cushing (or his agent, depending on what story you read) turned down the chance to be in John Carpenter's HALLOWEEN, and he also passed on many other projects for personal reasons, such as not wanting to leave his home in England for an extended period.

The result is that Peter Cushing's best showcase after STAR WARS happens to be a 1980 movie made for American television by Hallmark--a version of Charles Dickens' novel A TALE OF TWO CITIES. During that period the "Hallmark Hall of Fame" produced many adaptations of famous novels and stories for TV, starring numerous well-known prestigious performers. (As a kid back then I remember them being broadcast regularly--as a matter of fact I first saw this version of A TALE OF TWO CITIES on TV back in the 1980s.)

The made-for-TV movie was a genre unto itself in the 1970s and the 1980s. Many of these productions got huge ratings and acclaim, especially before the widespread advent of cable television. To this day there's a huge debate among cultural mavens and film buffs on whether made-for-TV movies should be on the same level as theatrical features. You certainly have to admit that a movie for television is a far different animal than a theatrical release--but for several actors, some of their best performances (and best roles) were in TV movies. It seems like every time I read a biography about a famous screen star, that star's television work is either barely covered or ignored altogether. That's a shame, because anyone who watches, for example, classic TV shows on a MeTV channel can tell you that the small-screen work of certain big-name stars can often be far more interesting and challenging than what that star did on the supposedly "more important" big screen. (There's something else when it comes to TV movies that I must point out--back in 1970s and 1980s America, there was no widescreen broadcasts, so for most viewers TV movies and theatrical films looked just about the same.)

Even if you feel that TV movies don't "count", you have to admit that this TV presentation gives Peter Cushing more of a chance to shine that just about any feature he was in since his Hammer period. Cushing plays Dr. Manette, a victim of the French aristocracy before that country's revolution. After 16 years of wrongful imprisonment in the Bastille, Manette is reunited with his daughter Lucy (Alice Krige). Lucy falls in love with Charles Darnay (Chris Sarandon), a French nobleman who gave up his title and moved to England. The pasts of both Manette and Darnay catch up with them, causing both men to return to France during the Reign of Terror, and having to accept the help of dissolute lawyer Sydney Carton (also played by Sarandon).

Cushing makes a memorable Dr. Manette, using his sad blue eyes and thin frame to show the pain and suffering the man has endured. It's a subtle performance, but an effective one--instead of going overboard with the Doctor's situation, Cushing uses simple motions and affectations to put over what Manette is going through. Peter Cushing is my favorite actor, and I couldn't help but feel glad seeing him in this production surrounded by such fine thespians as Kenneth More, Flora Robson, and Barry Morse. Hammer fans will be interested to know that one of the minor roles is played by none other than Robert Urquhart, who co-starred with Cushing in THE CURSE OF FRANKENSTEIN. Urquhart and Cushing exchange dialogue, but unfortunately they don't share a camera shot together. (I can't help but wonder if the two of them exchanged memories during the shooting.)

Chris Sarandon does a fine job playing the roles of Darnay and Carton (of course Sydney Carton is the showier part), and those who know Alice Krige as Star Trek's Borg Queen won't be able to recognize her here. Billie Whitelaw makes the biggest impression as a viciously determined Madame Defarge. Nigel Hawthorne has a small role, and this production is the screen debut of David Suchet, who is now known for his long-time portrayal of Agatha Christie's famous sleuth Hercule Poirot.

Directed by Jim Goddard and adapted from the Dickens novel by John Gay, the 1980 A TALE OF TWO CITIES is a fine version of the classic tale, if a bit stodgy at times. The production was filmed in both England and France, and some of the outdoor forest locations appear to be Black Park, famous for being used in several Hammer movies. Being that this is a television movie it obviously doesn't have the budget of a theatrical feature, but it still adequately conveys the feel and look of late 18th Century Europe. The production designer was the renowned John Stoll, who worked on such films as LAWRENCE OF ARABIA.

The 1980 A TALE OF TWO CITIES has just been released on Blu-ray by Shout Factory. The aspect ratio on this disc is 1.78:1--I assume that this is cropped from the original 1.33:1, but I'm not sure. I do have to say that the compositions look acceptable in widescreen . For a 1980 TV movie the picture quality is fine--some scenes look better than others. The DTS mono sound is full and clear. The running time listed on the case is 2 hours and 42 minutes, but the movie actually has a length of 2 hours and 36 minutes.

The real reason to watch this A TALE OF TWO CITIES is to see Peter Cushing in his last important dramatic showcase. Fans of the actor will be glad to know that Cushing has more screen time here than in almost all of his other 1980s film roles put together. This TV movie doesn't have the dramatic flair of the 1935 version starring Ronald Colman, or even the 1958 British version (which ironically featured Christopher Lee), but it does give viewers the chance to see the great Peter Cushing in a classic part outside of a horror or science-fiction setting.