INGRID BERGMAN: IN HER OWN WORDS 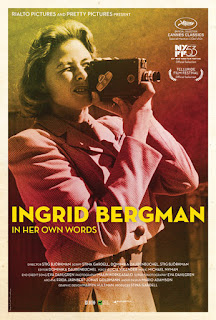 Last night I ventured out once again to the Browning Cinema on the campus of the University of Notre Dame to see the new documentary INGRID BERGMAN: IN HER OWN WORDS. The film was directed by Stig Bjorkman and produced with the endorsement and participation of Bergman's four children.

The subtitle IN HER OWN WORDS is particularly apt here, as the documentary uses audio from several interviews with Ingrid Bergman, along with quotes from her personal journals (these quotes are voiced by actress Alicia Vikander). Most of the imagery in this film comes from Bergman's many family home movies.

Ingrid Bergman was of course one of the most famous movie legends of all time. She also was blessed with a natural beauty that comes out very distinctly in this film time and time again. At the height of her career in the late 1940s Hollywood, Bergman left it all behind, and her husband and young daughter as well, to go to Italy and start a personal and professional relationship with neo-realist director Roberto Rossellini. The resultant notoriety over her actions made Ingrid persona non grata in America for a few years, but she made a triumphant comeback by winning the Best Actress Oscar for her role in the 1956 film ANASTASIA.

Throughout it all Bergman continued to be a fiercely independent woman who lived life on her own terms. In this film her children make it very clear that she loved them and they loved her, but acting was her true overriding passion. Bergman not only loved being in front of the camera, she loved filming and taking pictures herself--her eldest daughter Pia Lindstrom theorizes that Ingrid's mania for pictures and picture-taking may have stemmed from wanting to have a connection with her late father, who was a professional photographer. The Bergman children also wonder if their mother looked upon her real life as something of a performance. After watching this film, I wonder...did the thrice-married Ingrid view each of her relationships as like a long-running play--and did she want out of them after the "play" was starting to wind down?

This documentary also features several clips from Ingrid's most famous films, and very rare behind-the-scenes footage from them, including even her early Swedish movie appearances.

INGRID BERGMAN: IN HER OWN WORDS is a revealing portrait of a very well-known woman, but the title subject still has a bit of mystery about her. She was a shy and intensely private individual, but at the same time she kept voluminous personal correspondence and mementos (and she was determined to succeed in a profession that would draw worldwide attention to her). She cared greatly for her children yet led an unconventional lifestyle that often kept her separated from them. What makes Ingrid Bergman, and this documentary, so fascinating, is the fact that no matter how much we delve into her personal thoughts and feelings, she remains something of an enigma.
Posted by Dan Day, Jr. at 4:12 PM