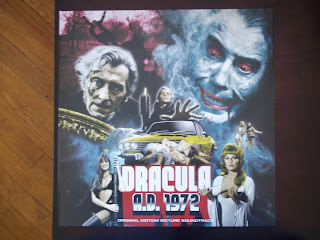 Is DRACULA A.D. 1972 one of the best Hammer films ever made? Maybe not....but it's one of the most entertaining. The movie has taken quite a bit of critical drubbing over the years, but many Hammer fans now accept and even appreciate A.D. 1972's goofy mixture of Gothic horror and pseudo-mod trappings.

DRACULA A.D. 1972 took the Hammer vampire series in a new direction with a modern sitting, and the film's music score went in a new direction as well. Instead of using the company's main composer, James Bernard, this production went with former Manfred Mann member Mike Vickers. The result was brassy, bold, and perfectly fitting the time that the movie was made in.

The DRACULA A.D. 1972 original motion picture soundtrack has now been reissued on 180g "psychedelic splatter" vinyl by Death Waltz Recording Company. Distributed by Mondo Tees, the record contains 13 total tracks. (I have to point out that this album does not contain the songs performed by the group Stoneground in the film.)

The album cover, designed by Silver Ferox (see above), is simply spectacular....it would be great if Mondo reproduced this as a poster or maybe even a t-shirt design. The album also features a gatefold sleeve with an appreciation of the movie written by the redoubtable film scholar Kim Newman. 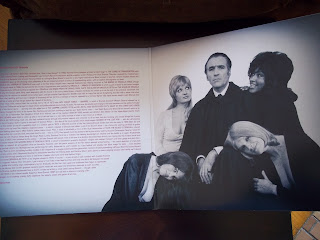 Listening to the album one can't help but be reminded of Peter Cushing frantically running around London searching for Johnny Alucard, or the various A.D. 1972 girls that are so memorable, such as Stephanie Beacham and Caroline Munro. It's not often that one gets to hear driving funky guitar rhythms backing a Christopher Lee performance, but Vickers' score works here. It remains one of the most unique and surprisingly effective scores for any British horror film.

The album is limited to 1000 pressings, so if you want it you'd better hurry. It can be ordered from mondotees.com. 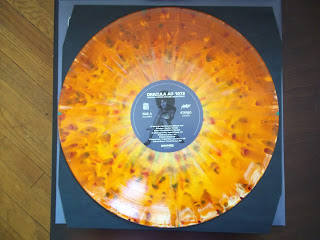 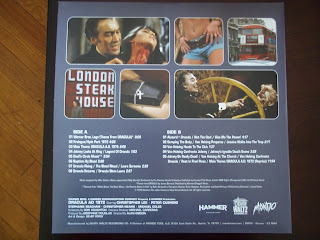