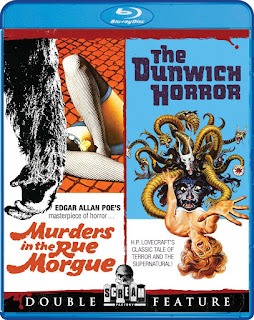 Shout Factory, under the company's Scream Factory label, has released a Blu-ray double feature consisting of two American-International horror films: MURDERS IN THE RUE MORGUE (1971), and THE DUNWICH HORROR (1970).

At first glance one would wonder why these two movies have been paired together, but they do have a few things in common. Both features are very loose adaptations of famous terror tales written by two of the greatest horror scribes of all time--Edgar Allan Poe and H. P. Lovecraft. Both movies feature actors that are not usually associated with fantastic material, and both movies are not very well-known (or well-regarded) among monster movie fans.

MURDERS IN THE RUE MORGUE isn't really a straight version of Poe's story--the screenplay merely uses the tale as a backdrop to a psychological murder mystery. Jason Robards plays the head of a theatrical troupe in late 19th Century Paris that stages plays based on Poe. Robards' wife and lead actress (Christine Kaufmann) is having strange dreams referring to the murder of her mother, who was also a member of the troupe. The man who supposedly killed the woman (Herbert Lom) appears to have come back from the grave to kill again. What develops is a convoluted story involving flashbacks, flashforwards, and many eccentric characters.

MURDERS was directed by Gordon Hessler and co-written by Christopher Wicking, who had already work together on a number of AIP horror features such as SCREAM AND SCREAM AGAIN, THE OBLONG BOX, and CRY OF THE BANSHEE. Like those films MURDERS can be very confusing at times. This Blu-ray presents the 98 minute "director's cut" of the film--AIP released a cut version over Hessler's objections (considering how head-scratching the director's cut is, I can only imagine how it must have been to watch the cut version). MURDERS was filmed entirely in Spain, and because of this it has a look and an attitude totally different from the typical AIP drive-in product being released at the same time--this feels like an independent European art film. The art-house feel also extends to the cast, with such performers as Adolfo Celi, Michael Dunn, and Lilli Palmer. AIP tried to get Vincent Price to play the lead role, but wound up with Jason Robards instead. Robards was a fine actor, but he doesn't really fit into this type of production (and he also appears to be unhappy that he's in it). Herbert Lom actually has the best role as the Phantom of the Opera-like avenger. Lom of course played the Phantom in Hammer's 1962 version of the story, and at times MURDERS comes off as a sequel to that film.

MURDERS IN THE RUE MORGUE is the last entry in AIP's famous "Poe series" of films, and it's also probably the most obscure. I never saw this film on TV when I was younger--as a matter of fact I didn't get to see it until it came out as part of MGM's "Midnite Movies" DVD series. (If Vincent Price had starred in it, I'm sure it would have had a bigger reputation.) MURDERS looks far better on this Blu-ray than it did on the earlier DVD. An interview with Gordon Hessler that appeared on the "Midnite Movies" DVD is repeated here, and there is a new audio commentary with Steve Haberman. Haberman attempts to defend Gordon Hessler and Christopher Wicking's work for AIP, but he spends way too much time reading off biographical information and movie credits for nearly everyone involved in the production.

This version of MURDERS IN THE RUE MORGUE has several intriguing elements, and I give credit to Gordon Hessler and Christopher Wicking for trying something unusual, but in the end the movie just doesn't come together, in my opinion.

THE DUNWICH HORROR is based on what many believe is the best story the legendary H. P. Lovecraft ever wrote. In my mind Lovecraft is better read than watched--his style is so uniquely imaginative that trying to show it in visual terms is almost always a set-up for failure. This movie was directed by Daniel Haller, who had already helmed a feature based on Lovecraft with DIE, MONSTER, DIE!. Haller was the long-time production designer for Roger Corman, and he certainly gives most of this movie an expressive look, especially the house where Wilbur Whateley (Dean Stockwell) resides--the Whateley home has a very Mario Bava-esque tone to it. Unfortunately this movie is set in contemporary times instead of early 20th Century New England, and that significantly detracts from Lovecraft's vision.

The mysterious Wilbur Whateley travels to Miskatonic University in an attempt to acquire the dreaded Necronomicon. Whateley wants to use the occult tome to help call upon the ancient Old Ones. Whateley also has plans for a pretty co-ed named Nancy (Sandra Dee). Dr. Henry Armitage (Ed Begley) must use all his knowledge of the dark powers to stop Whateley and his "twin brother".

From the very first time we see him on-screen, Dean Stockwell as Wilbur is so massively creepy that one wonders how he's able to get along in ordinary society. The movie suggests that Wilbur either drugs or hypnotizes Nancy to keep her around him--either that or Sandra Dee's acting is very flat. Nancy winds up having subliminal visions of what looks like California hippies cavorting about--one of the many psychedelic tricks director Haller uses to convey the evil of the Old Ones. (Among the others are rapid-fire editing and primary color effects.) Despite Haller's good intentions, everything about the movie is just too modern to accurately portray the sense of Lovecraft's cosmic mythos.

THE DUNWICH HORROR does have enough elements of Lovecraft to make it interesting for those who are fans of the author's work, but it bites off more than it can chew. Wilbur's "twin brother"--a undefinable monstrosity that is one of Lovecraft's greatest creations--is wisely suggested more than shown, but it still falls short of the mark. It doesn't help that the script features young females like the Nancy character--damsels in distress were most certainly not a major factor in Lovecraft's stories. The movie does have one of Les Baxter's most unusual music scores.

THE DUNWICH HORROR was also one of the "Midnite Movies" MGM DVD titles. The sound & picture quality of this Blu-ray version of the movie is excellent. Steve Haberman contributes a new audio commentary for this feature as well. He gives out some interesting background material on the making of the film, but once again he spends an inordinate amount of time reading off biographical sketches and credit lists.

Scream Factory deserves respect for giving both of these films a fine Blu-ray presentation. Both titles are not as famous as most of the other AIP exploitation films released during the same era, but they do have enough elements to attract the attention of hardcore disc-buying film geeks.