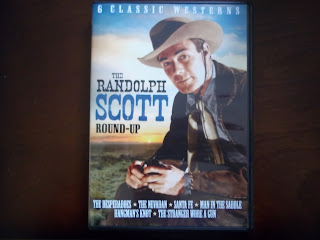 THE RANDOLPH SCOTT ROUND-UP is a two-disc DVD set from Mill Creek Entertainment which contains six different color Westerns from Columbia Pictures. The films were made between 1943 and 1953, and they all star Randolph Scott, of course.

Randolph Scott made so many Westerns over the course of his movie acting career that it's hard to keep track of them. Many of the Scott Westerns have the same type of plots, themes, and supporting casts--due no doubt to the fact that the actor produced several of them with his partner Harry Joe Brown, including the six titles in this set.

The movies featured in THE RANDOLPH SCOTT ROUND-UP have many similarities. In most of them Scott plays an acting or ex-Confederate soldier, and he also wears the same leather coat in just about all of them. Many actors make multiple appearances in this set--such as Claire Trevor and George Macready, who basically play the same type of characters in two different movies. The Scott-Brown producing team didn't just like using reliable talent over again, they also re-used many outdoor shooting locations--sharp-eyed viewers will notice the same rock formations cropping up in the films. If you do get this set, it might be a good idea to take your time watching it, instead of all at once.

The movies may resemble one another, but they are still all well-made and entertaining. I wouldn't consider any of them on the level of, say, the movies Randolph Scott made with Budd Boetticher (except maybe HANGMAN'S KNOT), but old-time Western fans will not be disappointed. They all run an average of about 85 minutes. There are three movies on each disc.

THE DESPERADOES (1943) The back of the disc case says that this movie was the very first Technicolor production for Columbia. Randolph Scott plays a sheriff investigating a series of hold-ups which might involve an old friend of his (a very young Glenn Ford). Scott and Ford make a very good team, Evelyn Keyes is cute as Ford's love interest, and this is one of the films in the set where Claire Trevor plays a dance-hall girl with a heart of gold. Directed by Charles Vidor.

THE NEVADAN (1950) Scott goes undercover in this one to find where bandit Forrest Tucker has hidden his ill-gotten loot. The real villain behind everything is George Macready, which complicates things for Scott, since he's taken a shine for his spunky daughter (a dark-haired Dorothy Malone). This one is stolen by Jeff Corey and Frank Faylen as semi-comic brothers who belong to Macready's gang. Directed by Gordon Douglas.

SANTA FE (1951) Scott plays an ex-Confederate soldier who tries to forget the Civil War and start his life afresh by working on the railroads out West. His three brothers, however, still hate the Yankees, and they try to sabotage Scott's plans. I can't help but think that this is one of the films that gave Sergio Leone some of his ideas for ONCE UPON A TIME IN THE WEST. This film was directed by actor Irving Pichel, who also played a small role in it and narrated the opening scene.

MAN IN THE SADDLE (1951) The drama in this picture comes from a love triangle between Scott, his ranching rival (Alexander Knox), and a lady determined to better herself (Joan Leslie). A high-class articulate actor like Knox might seem out of place in a Western like this, but the Scott-Brown producing team seemed to have a fondness for upper-crust bad guys (see George Macready). The very underrated Andre De Toth directed this outing.

THE STRANGER WORE A GUN (1953) This movie has all sorts of interesting elements in it. The most noticeable one of all is that it was released in 3-D, which means we get to see bullets fired at the camera (and many things thrown at it as well). This movie is not presented in 3-D on this disc, but that's not a big deal...even without the effect, this picture is one of Scott's best. The story begins with Scott riding with Quantrill's Raiders during their attack on Lawrence, Kansas (there has to have been dozens of Westerns which have used this incident as part of their story). Scott feels guilty for his part in the raid and tries to redeem himself by helping a stage line out West that's he's been hired to rob. George Macready plays almost exactly the same role he played in THE NEVADAN, and Claire Trevor plays almost exactly the same role she played in THE DESPERADOES. Lee Marvin and Ernest Borgnine are two especially nasty fellows working for Macready, and Joan Weldon is the nice girl who is the daughter of the stage line owner. Andre De Toth, who directed the most famous 3-D film of all (1953's HOUSE OF WAX), takes the reins here.

HANGMAN'S KNOT (1952) This is by far the best film in the set. If one didn't know better, one would assume that it had been directed by Budd Boetticher. It wasn't--it was written & directed by Roy Huggins, a man best known for his television work. HANGMAN'S KNOT has a darker tone than the usual B movie Westerns of this period. Randolph Scott is the leader of a group of Rebel soldiers working undercover in Nevada. The group successfully attacks a Union Army wagon and makes off with the Yankee gold inside, only to find out that the Civil War ended a month earlier. Soon the entire territory is after Scott and his men, and they wind up under siege at a way station by a gang of renegades who are more interested in getting the gold than they are in seeing justice done. The situation of disparate characters holed up and fighting for their lives is a taut and suspenseful one--this is the movie THE HATEFUL EIGHT should have been. What really makes this a standout tale is the excellent supporting cast. Among the people stuck inside the way station with Scott's men is a proud Union nurse (Donna Reed), a weak opportunist (Richard Denning), and the mother of one of the men killed in the Union Army wagon attack (Jeanette Nolan). Lee Marvin is the hothead of Scott's group (you just know that he and Scott are going to tangle one way or another....and they do), and Claude Jarman Jr. is a young Confederate Scott watches over. I had never seen this film before, and I was very impressed with it. HANGMAN'S KNOT deserves more attention among classic Western buffs.

Mill Creek is a company known for "value" (some would say "cheap") home video product. I got this set for $8.25 on Amazon. It's safe to say that none of these films have been remastered in any way--the color on all of them seems a bit faded (especially for THE NEVADAN, which was made in the Cinecolor process). You get what you pay for--the movies here don't look terrible, but don't expect high-end quality. (There are no extras, by the way.) This is a great set for Western and Randolph Scott fans--I believe it's worth buying just for HANGMAN'S KNOT alone.