The 75th Anniversary Of CITIZEN KANE 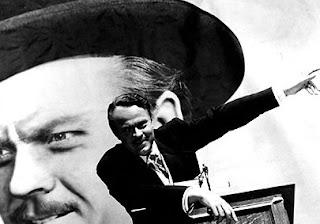 This week marks the 75th anniversary of the theatrical premier of CITIZEN KANE. I don't think I need to tell you that this is one of the most renowned and famous films of all time. Orson Welles' magnum opus remains a stunning cinematic achievement, and the title of the film itself has become a generic way to judge other productions (such as, "Well, you know, RIDE ALONG 2 isn't exactly CITIZEN KANE.").

CITIZEN KANE has to be considered one of the greatest and most important films ever made. I'm certainly not going to say that KANE is overrated, or deserves a re-appraisal...but I would like to point out that the Hollywood studio RKO gave Orson Welles almost unprecedented power and authority to make KANE as he saw fit. I believe that if several other great directors, actors, and writers who were alive in 1940 had been given the same type of contract RKO gave Welles, they probably would have turned out a game-changing film as well.

I'm not trying to take anything away from Orson Welles by saying that. What he did, as a co-writer/producer/director/actor, was monumental. There isn't really any other type of film like KANE. How do you even define it? Is it a biographical drama? Historical fiction? Pseudo-documentary? CITIZEN KANE is a genre unto itself, which is one of the reasons why it can never seem out of date.

Another reason why this 75 year-old film hasn't aged is that it doesn't seem like a 75 year-old film. The brilliant cinematography of Gregg Toland makes KANE look fresh and exciting, as if it were made a few months ago. Let's not forget the editing by Robert Wise and Mark Robson, which never gets enough credit. (Wise and Robson would go on to become successful directors in their own right.) And there's the sound by Bailey Fesler and James G. Stewart, accentuated by radio veteran Welles' own innovative ideas on what the audience for KANE should hear. The next time you see KANE, try watching next any other film from 1941--the difference between the two will be like night and day.

Let's put aside the technical virtuosity of KANE for a moment and focus on the cast. Almost all the major roles in KANE were played by performers making their film debuts--including Orson Welles himself. They may have been new to movies, but they certainly were not novices when it came to acting ability--most of the cast had been members of Welles' Mercury Theater group. The stories of Orson Welles being an egomaniac are legion--but every time I see KANE I notice how every performer in the movie is given a chance to shine, no matter how small the part might be. Whether it be with a special camera angle or a unique line of dialogue, Welles finds a way to showcase the actors under his direction. There are no "throw-away" roles in KANE. What is forgotten about KANE is that it is very much an actor's film. Joseph Cotten, Dorothy Comingore, Everett Sloane, Agnes Moorehead, Ruth Warrick, William Alland--they all give memorable characterizations, and they are the heart and soul of the film.

The script for CITIZEN KANE is credited to Herman J. Mankiewicz and Orson Welles, and it is the basis for several quotable lines of dialogue. My personal favorite is Dorothy Comingore (as Susan Alexander, the second Mrs. Kane) sarcastically spouting "Hooray for the Bulldog!" (If you've seen KANE as many times as I have, you'll get it.) Just as there are no throw-away roles in KANE, there's no throw-away lines either--another example of Welles' stage and radio experience. The CITIZEN KANE script doesn't have the generic narrative requirements of a typical movie of its era (or a typical 21st Century script, for that matter). The jarring shifts of tone, the flashbacks, the multiple points of view--this is a movie that needs to be watched, in the way audiences used to watch a film--with undivided attention. There's something else about the KANE script that makes it special--there's no "good guys" or "bad guys". The characters in KANE are a collection of human beings that defy easy stereotypes. Is Charles Foster Kane really a "bad guy"? The answer may not be so simple, and it may change every time you see KANE.

The production of KANE, and the aftermath of its release, has spawned plenty of legends--so many that trying to unravel the truth concerning the film's history is as much of a daunting task as trying to sum up the "life" of Charles Foster Kane. I won't go into those legends here, but let's say that the drama surrounding the making of KANE is in many ways as interesting as the film itself. The backstage dramas of CITIZEN KANE play a large part in the film's overall reputation.

I must admit that I don't watch KANE as much as I do a lot of other movies. I'm not in any way a sophisticated intellectual, so it's not like I pop it in just to show off to other people. (The version of KANE that I own is the 60th anniversary DVD edition.) But when I do watch it, it's like seeing it for the first time again. I can't help but be impressed by it. It's endlessly fascinating--so much so that, when I'm home and it happens to be on TV, I have to watch the rest of it. There's no way you can watch only part of CITIZEN KANE and stop. That's like trying to eat just one potato chip.

If you haven't seen CITIZEN KANE I highly suggest you do so. Don't see it because it supposedly is "The Greatest Film Of All Time", or because that's what supposedly intelligent film buffs would want you to do. See it to appreciate it for yourself. If you have any love of cinema, you owe it to yourself to see CITIZEN KANE at least once.