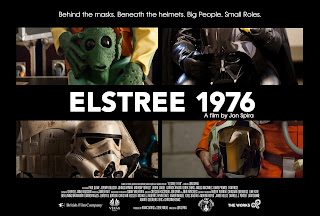 ELSTREE 1976 is a new documentary from writer-director Jon Spira. The title refers to the location (Elstree Studios, North London) and the time (1976) that most of the filming of the first STAR WARS movie took place. The title is a bit of a misnomer--this documentary isn't so much of an examination of the production of STAR WARS as it is a glimpse at the lives of some of the many people who made a small contribution to the film.

The stars of ELSTREE 1976 do not have names like Hamill, Ford, or Fisher. Instead we get the stories of mostly bit players and extras, such as Garrick Hagon, who played Luke's friend Biggs, and Angus MacInnes, who played the X-Wing pilot Gold Leader during the Death Star battle ("Switching...to...targeting...computer..."). There are a couple famous names (famous at least among film geeks): David Prowse, who played Darth Vader, and Jeremy Bulloch, who played Boba Fett in THE EMPIRE STRIKES BACK and RETURN OF THE JEDI. (Having Bulloch in this documentary is a bit of a cheat--I've met Bulloch and he's a nice guy, but he wasn't at Elstree in 1976 appearing in STAR WARS. If you think about it, having David Prowse is kind of a cheat as well--I certainly wouldn't put him in the same category as the other people featured in this film.)

Most of the 100-minute running time is taken up with the background stories of those participating in this project. Those who are interested in professional acting, or who wish to be actors, may find these stories interesting, while hard-core Star Wars fans may be impatient during these scenes. There really isn't a lot of information on the actual making of STAR WARS. ELSTREE 1976 gives the impression that, at least in the case of casting the bit players and extras, there was a bit of randomness to it.

The second half of the documentary is the best, as it deals with how the success of STAR WARS has impacted--or in some cases not impacted--the lives and careers of those featured in this film. The participants in ELSTREE 1976 feel a mixture of pride and sometimes frustration with the STAR WARS legacy. It is well known that David Prowse and Lucasfilm have an uneasy relationship, but here Prowse certainly doesn't come off as bitter or angry about his experience.

What really piqued my interest more than anything else in ELSTREE 1976 was the segments dealing with the autograph convention circuit. There apparently is something of a rift between those STAR WARS actors who had an official credit, and actually spoke dialogue, and those who did not have a credit or dialogue, and/or wore a costume and had their faces covered. The officially credited dialogue speaking performers feel that they were "real" actors, and they feel that those they consider "extras" should not be getting attention at the autograph tables. If you've ever been to an autograph convention you know that there is a huge amount of money in these things, and several screen actors today make most of their living off of them. The whole "who deserves to charge for an autograph" debate is one I find fascinating, and I kind of wish that ELSTREE 1976 had focused more on that (it would be very easy to do a whole feature-length documentary on the controversies surrounding the various geek culture autograph conventions).

ELSTREE 1976 has an even pace, and thankfully Jon Spira lets those who are interviewed move the story along instead of the editing or the visuals. This is a nice documentary with good intentions, and I believe that Star Wars fans should see it at least once--but don't expect a major analysis of the making of what I think is the greatest movie ever made.