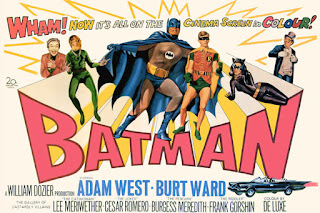 This year a number of famous films are having special anniversaries--films like CITIZEN KANE, the 1941 version of THE MALTESE FALCON, THE GOOD, THE BAD, AND THE UGLY, and ROCKY. 2016 happens to mark the 50th anniversary of the debut of a certain movie that holds a special place in my heart--the very first full-length theatrical release featuring the Caped Crusader, the 1966 BATMAN.

The 1966 BATMAN  was spun off of the wildly successful ABC television series. Ironically, the BATMAN movie was supposed to have come out first, as a way to introduce the format of the show and the characters. The ABC Network asked the BATMAN production team to work on the series instead, so it could premier as a mid-season replacement. The show became such a huge hit that it was decided to go ahead with the feature film soon after filming of the first season came to an end.

The 1966 BATMAN movie is basically a giant super-sized version of the TV show--and for someone like me, that's enough. For those that don't know, BATMAN is one of my favorite TV shows of all time. It made a huge impression on me as a kid, and Adam West is still something of a personal hero to me. When I first saw it I didn't see it as campy or funny--I took it seriously. I was mesmerized by it--the Batmobile, the BatCave, the bright primary colors, the tilted camera angles, the crazy villains, the fights--it really was a comic book come to life. Finding out that there was a BATMAN movie--with four super-villains in the same story!--was almost too much for my young mind to contemplate.

I first saw the 1966 BATMAN movie on Chicago's WGN Channel 9, which seemed to broadcast it a few times a year. I immediately thought it was one of the greatest things I had ever seen in my life. Not only did it feature an entire Gotham City Rogues Gallery (Burgess Meredith as the Penguin, Cesar Romero as the Joker, Frank Gorshin as the Riddler, Lee Meriwether as Catwoman), it had a BatBoat! And a BatCopter! And a BatCycle! Add to that the Penguin's submarine, giant flying umbrellas, and a dehydrator that reduced people to powder--how could any 8 or 9 year old not have this film imprinted on his or her memory?

What's amusing when looking back on this film is how it makes no allowances whatsoever to those who have not seen one episode of the BATMAN TV show. There's no backstory, or flashback scenes, or overall explanations of who Batman is, or why he does what he does. We get no reasons why the bad guys are bad...they just are. The movie's story gets to the action right from the very first scene, and the pace doesn't let up until the very end. (There is a bit of a break when Bruce Wayne goes on a date with Miss Kitka AKA Catwoman, but it's not much of one.) The 1966 BATMAN movie is about as far away from the lumbering, "serious" two-and-a-half hour comic book epics of the 21st Century as you can get.

The budget for the BATMAN movie allowed it to incorporate things and ideas that the TV series never could. The footage of the new Bat-vehicles introduced in the movie would turn up many times during the rest of the BATMAN series' run. Instead of the same usual Gotham City street sets we see in the TV show, the movie has Batman & Robin interacting with real-life locations. The 1966 BATMAN movie may now look cheap compared to the CGI-filled genre spectaculars of today, but as a kid it all looked amazing to me.

The plot of the film--having four super-villains band together and dehydrating the members of the "United World" council--isn't all that far fetched from the plots of superhero movies made in the present day. (As a kid I thought the idea of turning someone into powder was genuinely unsettling.) All four of the villains get a chance to shine, but Catwoman, due to her masquerade as a Russian journalist named "Miss Kitka", gets the most screen time. To me, Julie Newmar will always be THE Catwoman. Newmar was unavailable when the BATMAN movie started shooting, so Lee Meriwether took her place. Meriwether certainly had the, um...physical requirements for the role, but while Julie Newmar's Catwoman exuded a sexy playfulness, Meriwether's Catwoman seems to be in a constant foul mood. If Julie had been in the film, the sub-plot of Bruce Wayne romancing Miss Kitka would have been even more unbelievable--how in the heck can Bruce not know Miss Kitka is actually Catwoman? With all due respect to Lee Meriwether, she's okay in the role--but she's not Julie Newmar.

There's so many other things I could go on and on about concerning this film--like the scene where Batman tries to fight off a shark by punching it over and over again, or the now famous (some would say infamous) "Some days you just can't get rid of a bomb!" sequence. Thinking about the bomb sequence makes me realize that the two big superhero movies released in 2016 have collateral damage as a major part of their plots, and Batman was trying to avoid collateral damage 50 years earlier! I also like how during the BATMAN movie's opening credits, when one of the villains is shown, we hear a snippet of that particular villain's musical theme. One thing that gets forgotten about the BATMAN movie is how much Bruce Wayne gets to do. He not only has a fling with Miss Kitka, he participates in two different large-scale fight scenes. (During these fight scenes involving Bruce, notice how the comic book words do not appear on-screen....because Bruce is doing the fighting, not Batman!)

Watching the 1966 BATMAN movie on Blu-ray makes one realize how important color was to the TV show. The 1966 BATMAN universe doesn't just use color, it flaunts it. Mario Bava himself probably appreciated BATMAN (in Bava's DANGER: DIABOLIK, the main character's hideout has a strong resemblance to the BatCave). For today's audiences who are used to comic-book movies with dark-tinged, desaturated color schemes, the 1966 BATMAN movie might seem overly garish--but that's how 1960s-era comic books looked. (I also have to point out that in 1966, many Americans did not have color television sets, so the 1966 BATMAN movie allowed several members of the audience to see what the show looked like in color for the very first time.)

The 1966 BATMAN movie can't be compared to the comic book films of the 21st Century. BATMAN is a totally different animal--at the time it was made there was absolutely nothing like it. Yes, it is campy, and it's cheesy, and yes, it is a far cry from the Batman character that has been established over the last forty years. But it is a lot more fun--and a lot more entertaining--than the supposed "real" Batman movies that have been made since Tim Burton's BATMAN in 1989. Today's comic book movies try to act like they are nothing like comic books. The 1966 BATMAN movie is a giant super-sized comic book.