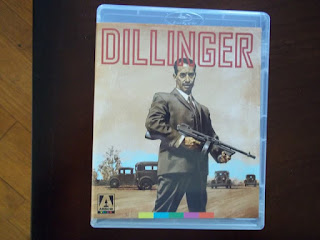 John Dillinger's stint as Depression-era  America's Public Enemy No. 1 was brief, but it was enough to catapult him into a folk legend. Dillinger has appeared as a character in several movies and television shows, the most notably recent being Michael Mann's PUBLIC ENEMIES (2009). Mann's version of Dillinger's criminal career was probably the most historically accurate--but John Milius' mythic take on the tale is by far more entertaining.

Milius made the inspired choice to cast Warren Oates as Dillinger instead of a younger, better-looking "leading man" type. Not only did Oates bear an uncanny resemblance to Dillinger, he was able to properly portray the bank robber's cocky charisma. Out of all the screen Dillingers, Oates is in my opinion the best--and if you want proof of that, just watch PUBLIC ENEMIES again and see how Johnny Depp, who is a better-looking "leading man" type, wound up giving a somewhat dour performance.

Oates as Dillinger is matched by Ben Johnson as another historical figure, Federal agent Melvin Purvis. Instead of sticking to the facts, Milius (who also wrote the script) does the John Ford route and "prints the legend" by making the movie a personal battle between Dillinger and Purvis. Long-time character actors Oates and Johnson make the most out of their leading roles, giving the story a true Midwest American flavor. (In PUBLIC ENEMIES, Michael Mann cast another better-looking leading man type as Purvis in Christian Bale--and just like Johnny Depp, Bale comes off as dull and uninspired.)

Milius mixes in many other famous gangster figures from the period, such as Machine Gun Kelly, Pretty Boy Floyd, and a rather psychotic Baby Face Nelson (played by a young Richard Dreyfuss). Milius has this All-Star rogues gallery partake in several massive shoot-outs, climaxing with a vicious gunfight between Dillinger, his compatriots, and a group of G-Men led by Purvis at the Little Bohemia lodge in Wisconsin. The action is well-staged and to the point, without the excessive flourishes and ADD-style editing one sees in the 21st Century superhero epics. (Aspiring filmmakers could learn a lot by seeing how Milius uses violence in DILLINGER.)

Being that this was a 1970s exploitation flick from American-International (and Milius was a first-time director), DILLINGER did not have a very large budget. But in a way that played into the movie's favor. Filmed mostly in rural Oklahoma, DILLINGER has far more of a 1930s sensibility than most "big-time" movies that cover similar subjects (and yes, I have to include PUBLIC ENEMIES in that list). None of the actors come off as not fitting into the period--even Michelle Phillips as Dillinger's girlfriend. Barry De Vorzon's music reinforces the Depression-era feel. (The song "Red River Valley" is used--it was demanded by Milius and is one of the director's many homages to John Ford in this film.)

Because of John Milius' supposed beliefs, every one of the movies he either wrote or directed has been thoroughly examined for all sorts of political subtexts. In DILLINGER Milius eschews any sort of social commentary. There's no attempt to analyze why Dillinger has engaged in a life or crime, or any examination of how his upbringing might have affected him. (The closest Oates as Dillinger comes to revealing himself is when he admits he likes to steal other people's money.) Milius doesn't try to make Dillinger out to be some sort of class-conscious "hero", or a rebel against the system. Milius shows Dillinger as a bank robber, plain and simple. (When the movie begins, Dillinger is already well into his criminal career, and the movie ends with Dillinger's death in Chicago.) DILLINGER is the antithesis of the more renowned BONNIE AND CLYDE--Milius shows his disdain for that movie by having Dillinger and Pretty Boy Floyd disparage the infamous couple in a dialogue aside. Milius' main concern in DILLINGER is showing tough, hard men opposing one another in a tough, hard environment. Warren Oates has plenty of verve and panache, and we like watching him....but we don't necessarily admire him, or his choice of lifestyle. We don't feel sorry for him either (or any of the other gangsters seen in this film).

Every Arrow Video home video release is special, and DILLINGER is no different. This release comes with a Blu-ray and a DVD, and both discs have the same supplementary material. There are three different new interviews included with producer Lawrence Gordon, director of photography Jules Brenner, and composer Barry De Vorzon. All three give interesting accounts of what it was like making the film, and of course they offer several anecdotes on John Milius. An audio commentary by Stephen Prince is featured as well. Prince gives a fair amount of background material on the real John Dillinger and Melvin Purvis, but he spends most of his time analyzing nearly every camera shot in the movie. A 24-page booklet is part of the package, which has an essay on Dillinger and Purvis by the redoubtable Kim Newman (is there any subject Newman doesn't know anything about?), and a 1973 interview with John Milius by John Austin. The booklet also has color photos from the film, including a couple of stunning shots of Michelle Phillips. This release also has a double-sided case cover sleeve. The one drawback to the extras is that John Milius himself is not personally involved--it would have been fascinating to hear what he thinks about his directorial debut today.

The picture quality for the DILLINGER Blu-ray is not spectacular, but I think that is due to the materials available than with anything on Arrow Video's part. Even though the audio is in mono, it is very robust--it's a bit of a shame that a movie with this many gunshots wasn't originally in 5.1 surround sound. All in all, this is another exemplary release from Arrow, and more proof that the company belongs in the same class as Criterion and Kino.

Before I end this post, there are a couple of personal stories I'd like to share which involve John Dillinger. In March of this year independent filmmaker Paul Lyzun and I visited our mutual friend Dan Hively in Indianapolis, IN. Not far from Dan's house is Crown Hill Cemetery, where we went to see the resting place of none other than John Dillinger. 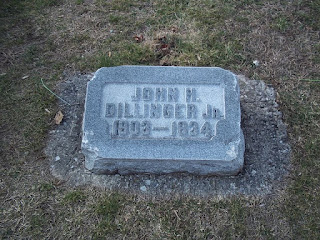 The other story is more of a family legend. In 1934, John Dillinger and his gang robbed a bank in my hometown of South Bend, IN. According to my Dad, my paternal grandfather was walking in downtown South Bend on that day, and he supposedly watched Dillinger and his gang drive by during their getaway. I certainly can't confirm that story, by the way.
Posted by Dan Day, Jr. at 1:11 PM