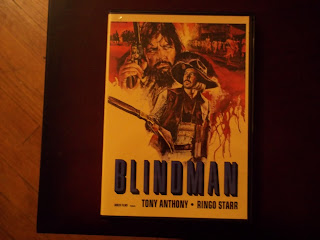 Out of all the movie genres, the wildest and the wackiest has to be the Spaghetti Western. 1971's BLINDMAN certainly lives up that reputation, with a main character who is...blind. (At least the title doesn't fool you into thinking the movie is something it is not.) The film also stars none other than Ringo Starr. BLINDMAN has just been officially released on DVD by ABKCO, the company that produced the film.

Tony Anthony, who had a long history of appearing in Euro Westerns, stars as the Blindman (he also wrote the script). The Blindman (following Spaghetti Western tradition, we never find out his real name) is a bounty hunter who is tasked to deliver 50 mail order brides to a group of miners in Texas. The Blindman has been sold out by his partners, however, and the brides have been taken by a ruthless Mexican bandit named Domingo. The Blindman travels south of the border to get them back, and faces off against not only Domingo's gang, but the Mexican Army as well.

The very idea of a blind gunslinger seems ludicrous, but Anthony does an exceptional job in making the viewer believe that a guy like this could operate and survive in the Old West. The soft-spoken Blindman fools his opponents into thinking he is helpless, but he's a crack shot with his Winchester rifle (which he also uses as a makeshift cane). The Blindman is also proficient in the use of dynamite (like most Euro Western characters, he seems to have a few sticks on his person at all times). I presume that Anthony was inspired by the Japanese film series concerning Zatoichi, the Blind Swordsman.

As for Ringo Starr, he plays Domingo's vicious brother Candy. Nowadays, whenever Ringo posts something on the internet, he adds the phrase "Peace & Love". Well, in BLINDMAN, Ringo isn't very peaceful and loving. His Candy not only tortures the Blindman, he kicks him in the face afterwards for good measure. The reason for Candy's ire is a local girl he's obsessed with who tries to help the Blindman. Those Beatles fans who decide to watch this film will be shocked at how cruel Ringo acts in it. Why he even wanted to play a role like this--in a film like this--is a mystery. Was he trying to show off his acting range? Whatever the reason, the melancholy-looking mop-top appears even more melancholy here--while most Spaghetti Western villains revel in their heinous acts, Candy comes off as droopy and depressed. One would assume that Ringo didn't like making this movie very much--but he did record a song called "Blindman", which appears on the B-side of the "Back Off Boogaloo" single. The song is not in the film, however...it is readily available on YouTube.

Director Ferdinando Baldi uses the widescreen Techniscope format very well, and the action scenes are staged successfully. The music score by Stelvio Cipriani is a good one for this genre, and it fulfills the bizarre aspects of the movie. I must point out, though, that BLINDMAN is not exactly for all tastes. The 50 mail order brides are treated worse than 50 head of cattle would be. Not only do we not get to know any of the women, none of them have any dialogue! During the course of the story the brides are manhandled and assaulted at various times, and their clothes get ripped off frequently. The Blindman's affliction is taken advantage of, and the movie does try to derive some humor from his situation, though not as much as one might expect.

ABCKO's DVD of BLINDMAN presents the film in 2.35:1 anamorphic widescreen, and the DVD case says the film was mastered from the original 35mm negative. The movie does look impressive, and considering it's a lesser-known Spaghetti Western, I doubt one can find a version that looks even better. The soundtrack is in English, with a choice between a 5.1 or a 2.0 mix--I listened to the 5.1 mix and it sounds very robust, especially the music score. I assume that since this DVD comes from the company that made the film that it is uncut--there's plenty of topless shots of the hapless brides--but with any Euro Western, you can never say for certain that it is complete.

BLINDMAN will be of most interest to Spaghetti Western fans. I would call it an above-average example of the genre, due to its quirkiness. Beatles fans may want to see it at least once because of Ringo--but they won't be too happy with how his character acts on-screen.
Posted by Dan Day, Jr. at 9:13 AM