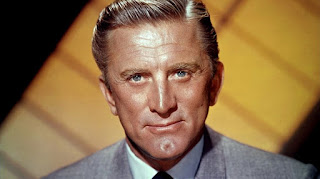 On this day exactly 100 years ago Issur Danielovitch was born. Under the name Kirk Douglas, he went on to become one of the greatest leading men in cinema history. I couldn't let such a momentous occasion as a 100th birthday go by without writing a blog post.

It's ironic that Kirk Douglas' film debut was as Barbara Stanwyck's weak-willed husband in THE STRANGE LOVE OF MARTHA IVERS (1946). Douglas became a symbol of American male movie masculinity, helped by his most outstanding acting trait, an almost manic intensity. Douglas didn't just play a role--he consumed it. Just watching a typical Douglas performance can wear a person out.

In the decade of the 1950s, Douglas starred in an amazing run of renowned films: ACE IN THE HOLE, DETECTIVE STORY, THE BAD AND THE BEAUTIFUL, 20,000 LEAGUES UNDER THE SEA, LUST FOR LIFE, GUNFIGHT AT THE O.K. CORRAL, THE VIKINGS, PATHS OF GLORY, and the vastly underrated LAST TRAIN FROM GUN HILL. He finished the decade starring in and producing SPARTACUS. How many other movie stars have had a ten year period like that?

What made Douglas' leading man credentials different was that he almost never played what would be considered a "normal" starring role. Today actors like Leonardo DiCaprio are lauded for choosing difficult characters to portray, but Kirk Douglas was doing that over a half-century ago. The men Douglas enacted were not simple one-note heroes--they were often conflicted, troubled men, men who could exasperate as well as inspire. Consider his Vincent Van Gogh in LUST FOR LIFE--what I feel is his all-time best screen performance. Could any other American leading man of that period have been able to star in that film? And what about his role in THE VIKINGS, in which his character gets disfigured early on in the story? How many big stars would spend almost an entire film with their handsome faces covered in a gruesome makeup?

Douglas produced several of the films he starred in, and he even directed a couple as well. It was Douglas who helped bring ONE FLEW OVER THE CUCKOO'S NEST to Broadway, as well as playing the lead role. The multi-tasking, multi-format celebrity we hear so much about today is walking a trail blazed long ago by Douglas.

There are very few real movie stars alive today, and Kirk Douglas is one of them. The best compliment I can give the man is that he never did anything easy.