I had heard plenty of rumors beforehand that a CGI Tarkin would be featured in ROGUE ONE, so I wasn't all that surprised to see it in the actual film. What did surprise me was that this wasn't a mere cameo--Tarkin plays a rather significant role in the story. He wasn't hidden in the shadows, and we didn't just get a quick glimpse of him--he's right there, front and center, in a number of scenes.

For better or worse, it definitely looks like Peter Cushing--I even have to say that the effect is almost uncanny. It's a bit jarring, no doubt, but it's also somewhat thrilling to see one's favorite actor "back" on the big screen.

The biggest problem with the CGI Tarkin, from my perspective, is the voice. Actor Guy Henry performed the "base" for the CGI rendering (he's credited on screen as Tarkin), and I assume he did the voice as well. Peter Cushing had a very unique and specific look--and he also had a very unique and specific voice and speech pattern. You might even say Cushing's voice is harder to imitate than his physical appearance. The CGI Tarkin looks so much like the actual Cushing, that hearing a very non-Cushing voice coming from it is kind of disconcerting. 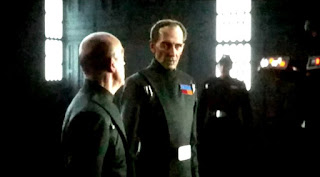 Is it Cushing...or is it Memorex?


I would say that for me, the CGI Cushing worked, even with the strange voice. There's one thing in particular that really sold me on it. It happens at the end of Tarkin's first appearance, after he has a heated discussion with Ben Mendelsohn's Krennic on the Death Star. After Krennic leaves, Tarkin looks back and gives a wicked smirk. That smirk is absolutely, totally something the real life Cushing might have done--he used that type of smirk many times throughout his acting career, especially when he was playing Baron Frankenstein. When I saw that, I started nodding my head and saying to myself, Yes, that's him.

Now, there are plenty of folks who are not so impressed by the CGI Tarkin--and a few others who are upset about it. Many (like my brother Robert) believe that the effect is distracting, and takes one out of the movie. Some think that it is creepy, because Cushing has been dead for over 20 years. The thing about that is, movies constantly have long-dead famous or historical figures in them (played by actors, of course). No one seems creeped out over that.

There's a also a number of people who feel that Disney/Lucasfilm crossed some sort of ethical line by using Cushing's image in this way. Joyce Broughton, who oversees the Cushing estate, gave her permission to Lucasfilm, so from that standpoint I don't think the filmmakers did anything wrong. Some will argue that Lucasfilm shouldn't have done it, period--that they should have hired another actor, or kept Tarkin out of the story altogether.

The problem with that viewpoint is that Tarkin plays a very important role in the proceedings--the character had to make an appearance somehow. As for casting another actor, as I've already stated, nobody really looks--or sounds--like Peter Cushing. Who would you have cast? David Warner? Bill Nighy? In my opinion, to have another actor play Tarkin would have been just as distracting.

As for the idea of "Get another actor and slap some makeup on him", that was done before in REVENGE OF THE SITH. Wayne Pygram played Tarkin, and we only see him very briefly at the end of the film, in a long shot. I think the reason he wasn't shown more is simple, if you look at the picture below. The makeup Pygram wore seems in my estimation overdone--the sunken cheeks may look natural on Cushing, but when applied to someone else it appears bizarre. 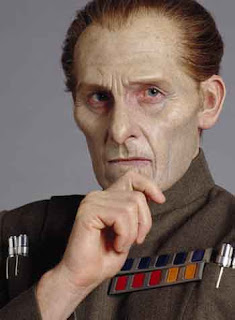 Wayne Pygram as Tarkin in REVENGE OF THE SITH

I sincerely believe that the makers of ROGUE ONE wanted to use the "real" Tarkin, and they wanted to honor Peter Cushing, who is, after all, a major geek icon. One of the end credits of ROGUE ONE says "With Special Acknowledgment to Peter Cushing, O.B.E." But I also think there might have been an ulterior motive in the use of a CGI Tarkin. It might just have been a sort of test...remember that Disney/Lucasfilm plans to make several stand-alone Star Wars features, and they may have wanted to see if this was a viable way to bring back an original character. Besides, there's another CGI version of a famous role in ROGUE ONE, and I won't get into that, in case you haven't seen the film yet.

I've been reading a lot of posts on the internet about ROGUE ONE and the CGI Tarkin, and from I can ascertain, the more you love the movie (and the Star Wars Universe in general), the more willing you are to buy into the effect. Those who are bothered by the effect the most seem to be those that could care less about anything having to do with Star Wars. My feelings on the subject are obviously biased, and I'll admit that if a CGI version of a late actor I didn't have any major feelings for appeared in a movie franchise that I wasn't a major fan of, my reaction would most likely be, "What a goofy gimmick!!"

It's one thing to see the CGI Tarkin in a darkened theater, while you are caught up in the film, than it is to be watching it at home, on a HD widescreen monitor, where you can examine it in more detail. Whether the CGI Tarkin will hold up on Blu-ray remains to be seen.

Another part of the CGI Tarkin discussion is what ramifications this will have on the future of movies. I personally don't foresee dead actors popping up everywhere. ROGUE ONE is a science-fiction fantasy film, and most viewers would be more willing to accept a CGI recreation of a performer in that context than they would in a "normal" movie. I doubt that we are going to have to worry about seeing a CGI Carole Lombard placed in a contemporary romantic comedy, or a CGI Ingrid Bergman showing up in a contemporary drama. But...I wouldn't put anything past the 21st Century entertainment industry. In the end it will be the public that eventually decides how far this thing might go.

The CGI Grand Moff Tarkin isn't 100% perfect, but I, as a Peter Cushing fan, got a kick out of it. Think about it this way--all over the internet, people are mentioning Cushing's name. This is very satisfying to me, since the usual reaction I get when I tell people that Peter Cushing is my favorite actor is, "Who's Peter Cushing??" We don't know what Cushing himself might have thought of this, but considering that he mentioned in interviews how disappointed he was that Tarkin's death prevented him from being in the other Star Wars films, I bet he would have enjoyed it. Wherever he's at right now, he's probably nudging Christopher Lee in the ribs, saying, "I'm on the silver screen again, dear boy!"
Posted by Dan Day, Jr. at 10:11 AM