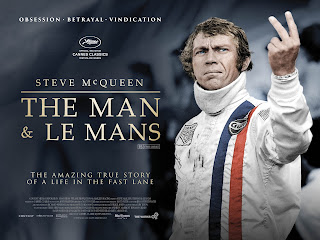 36 years after his death, Steve McQueen remains an important pop culture icon--he wasn't called "The King of Cool" for nothing. The documentary STEVE MCQUEEN: THE MAN & LE MANS examines one of the pivotal moments of McQueen's life--the 1970 production of his dream project, LE MANS.

Steve McQueen had spent most of his life involved in some form of motor sports or another, and by the late 1960s, he had accumulated enough clout as a movie star to get his dream of making a "real" movie about auto racing started. As this documentary (directed by Gabriel Clarke & John McKenna) shows, the dream soon turned into a nightmare.

At first McQueen was determined to actually participate in the real 24 Hours of Le Mans race, but insurance concerns stopped that idea cold. Production began without a finished script, and as the filming slogged on and on, and the budget got bigger and bigger, the film's backers wondered if the movie would ever be completed.

McQueen personally chose John Sturges as director--the two men had worked a number of times before. As things began to spiral out of control, Sturges grew impatient with McQueen and quit. The actor finally had to make a major sacrifice just to get the film finished, and the documentary puts forth the idea that the experience soured McQueen on competitive racing altogether.

THE MAN & LE MANS features a fair amount of footage shot for McQueen's film that was never used, and several clips taken on the set during the production. It goes into detail about the many technical advances that were used to film the cars going at their full speeds of over 200 miles per hour. Many people who were part of the crew of LE MANS are interviewed, including some of the professional auto racers who drove on the film.

Steve McQueen's first wife and son are also interviewed. THE MAN & LE MANS pulls no punches when it comes to McQueen's rather complicated personality. The things that made McQueen so exciting on-screen, such as the sense of danger he exuded, his anti-authoritarian, rebellious attitude, and his inability to conform to anyone's standards except his own, were traits that also carried into his personal life--not always to his advantage. McQueen was determined, one way or another, to get his vision of what racing was like on the big screen--and this determination affected his family, his friends, and those who risked their lives driving the cars for the film. Many private audio clips are used of McQueen musing over a number of subjects, and these sound bites reveal the actor to be far more thoughtful than one would expect from his usual public brashness.

This documentary is a must-see for anyone who is interested in Steve McQueen, and for those who get into the "inside baseball" aspects of the movie industry. It is worth a look to racing fans as well, especially for the footage of the vintage cars and the racers interviewed.

The actual movie LE MANS isn't really the bomb some people have suggested--but if you are not a racing or Steve McQueen buff, you'll probably be bored. STEVE MCQUEEN: THE MAN & LE MANS is definitely not boring--McQueen is just as much a fascinating subject as he was during his heyday as a iconic leading man.