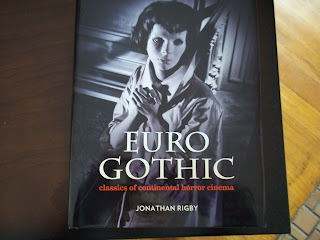 In this new book, Rigby deals with four specific European countries--Germany, France, Italy, and Spain. Those who might feel that Rigby should have expanded his coverage must be advised that EURO GOTHIC is over 400 pages long, and hundreds of films are given thorough analysis. (If Rigby had tried to deal with every European horror film made since the dawn of cinema, he probably would never had gotten the book done.)

Rigby begins in the silent era, with the German Expressionist classics that laid down the groundwork for so many future productions. The coming of sound (and the coming of fascist dictatorships soon after) curtailed Euro Gothic cinema for a period, and it wasn't till the late 1950s that the genre began to pick up steam, inspired of course by the success of England's Hammer Films.

The 1960s saw Euro Gothic at its full height, and in the 1970s, with violence and particularly sex ramped up, the floodgates opened with an array of bizarre titles and stories. Rigby stops at the early 1980s, when gore & zombies flourished on the continent.

The book retains basically the same design of ENGLISH GOTHIC and AMERICAN GOTHIC, and it is lavishly illustrated with two different color sections.

Rigby as usual does a brilliant job in placing the films within the context of the times in which they were made, and while he discusses their pluses and minuses in an authoritative manner, he still manages to work in servings of dry humor. The author makes many perceptive comments about the various titles, such as his statement that 1963's THE LAST MAN ON EARTH would have been better served with a "regular guy" actor in the lead role such as Martin Balsam or Lee J. Cobb instead of Vincent Price.

The titles used of the films covered are those which they were known in the countries in which they were produced, which might cause some confusion for readers familiar with the English versions. (An Midwestern American guy like myself can barely spell TERRORE NELLO SPAZIO, let alone pronounce it--besides, that movie will always be PLANET OF THE VAMPIRES to me.)

When it came to ENGLISH GOTHIC and AMERICAN GOTHIC, I had seen--or at least heard of--just about every single one of the movies featured in those books. With EURO GOTHIC, most of the films featured I had very little or no knowledge of. If you think you've seen everything when it comes to horror films, EURO GOTHIC will dissuade you of that notion. A few of the movies covered in the book I even sought out and viewed on the internet, and I intend to find more. I do have to admit that a number of the titles, especially many from the 1970s, hold no appeal for me at all. The author deserves some kind of award for viewing all these productions--he must have had an infinite amount of patience (and a very strong stomach). If you are someone like me, you've read just about every important book on classic horror films that there is. It's nice to find a volume on the subject that increases your knowledge of it, instead of reiterating what you already know.

ENGLISH GOTHIC and AMERICAN GOTHIC are two of my favorite movie books of all time, so it's no surprise that am I going to heartily recommend EURO GOTHIC. I assume that this will put an end to Jonathan Rigby's "Gothic" film series....but I hope that he might decide to write a sequel to AMERICAN GOTHIC (that book ended in the late 1950s), or maybe he can examine the American science-fiction film boom of the 1950s. Perhaps he can call that book AMERICAN FUTURE?
Posted by Dan Day, Jr. at 10:46 AM