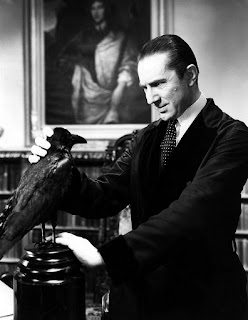 1. WHITE ZOMBIE (1932): No, Dracula isn't on the top of this list. Bela is actually given a lot more to do here, and he's sensational as Zombie master Murder Legendre. Every movement and every gesture by Lugosi has some malevolent meaning. He gets some great lines in this movie, including the classic "For you, my friend, they are the Angels of Death." Lugosi could take just about any line and make it sound as if it had some portent of doom.
By the way, forget about all the public domain DVDs of this film. Try to find the Roan Company DVD, or wait until January when Kino releases this on Blu-ray.

2. THE RAVEN (1935): Nothing against the Count, but this is full-tilt Bela...Bela to the power of 11, so to speak. Bela's Dr. Richard Vollin is just a bit obsessed with Edgar Allan Poe. Vollin tries to kill off the rest of the cast using torture devices from Poe's stories. He also blackmails a wanted criminal (Boris Karloff) to help in the plot by disfiguring him. In most of the Karloff-Lugosi teamings, Boris is usually the one with the meatier role, but this is Bela's show all the way. And what a show it is. Bela pulls out all the stops, and Dr. Vollin is his wildest part.

3. DRACULA (1931): And here we are. One of the seminal performances in film history. Bela (and the film) has taken a lot of critical drubbing in recent years, but his Dracula still holds up. Show any little kid a picture of Lugosi and that kid will say, "Dracula". There's nothing more trending than that. Bela Lugosi must still be considered THE ultimate screen vampire.

4. SON OF FRANKENSTEIN (1939): For those who think Lugosi was just a hack actor, think about this: he's surrounded by Basil Rathbone, Boris Karloff, and Lionel Atwill....and Bela steals the film. His Ygor is another one of those seminal classic horror film creations. One of the many myths about Lugosi is that he did not know the English language very well. The next time you watch SON notice Bela's dialogue scenes. His timing is perfect, and he gives Ygor's lines the right amount of sarcasm and double meaning. Bela should have received the Best Supporting Actor Award for this role.

5. MURDERS IN THE RUE MORGUE (1932): Another fine example of the "wild & wooly" Bela. As female lead Sidney Fox exclaims after getting her first look at him, "He's a show in himself!" Lugosi's Dr. Mirakle, decked out in frock coat and pilgrim hat, does make a lasting impression. Mirakle tries to find the right woman for his ape so he can prove his theories on evolution. Bela gets a great speech in a sideshow tent which is the best thing in the film. Unfortunately Mirakle isn't around for the climax. If MURDERS had more Bela, it might have joined the ranks of the top-tier Universal Monster Classics.

Bela Lugosi, like Dracula, will never die. He may have been hammy, or over-the-top, but he was unique.....something that is very rare in today's world of entertainment.
Posted by Dan Day, Jr. at 6:24 PM