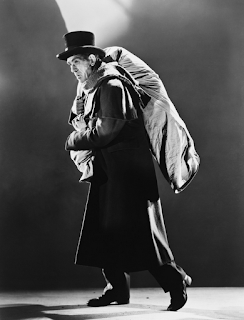 
1. FRANKENSTEIN (1931): Kinda obvious, but it has to be. Karloff's portrayal as the Monster isn't just a great horror performance, it's one of the greatest in the history of film. The Monster isn't evil; he's a creature that has been thrust into a world he doesn't understand, by a "father" who only sees him as an experiment. The Monster is actually more human than just about anyone else in the cast. He's the ultimate outsider--which is why a hundred years from now, audiences will still be moved by what Karloff achieved.

2. THE BODY SNATCHER (1945): This isn't really a horror film--it's more of a historical melodrama. Karloff plays John Gray, an early 19th Century Scottish graverobber. Gray is more of a real "monster" than most of the supposed ones Karloff played, but Boris makes him more interesting than just a mere bad guy. Charismatic and street-smart, Gray blackmails his best "customer", Dr. MacFarlane (Henry Daniell). The sly Gray enjoys dominating the upper-class Doctor, and the dialogue scenes between Karloff and Daniell are an example of classic screen acting. This film was the last time Boris and Bela Lugosi would work together, and they get to share a creepy farewell.
Brilliant work here by Karloff. He may have been inspired by producer Val Lewton, especially after all the potboilers Boris had done throughout most of the forties.

3. THE WALKING DEAD (1936): No, this isn't some TV show on basic cable. Karloff plays John Elman, an ex-con set up by the mob for murder. Elman is given the chair, and brought back to life by scientist Edmund Gwenn. This is basically a contemporary version of the Frankenstein story--but Karloff turns it in to something much more. Elman literally scares to death the men responsible for his plight. Elman doesn't use threats or aggressive action. All he does is give the bad guys a look at his sad, haunted visage. Karloff can say more with a gaze than most actors can with ten pages of dialogue. Watch Boris in this film and you will believe that Elman has experienced more pain than any human being imaginable. John Elman is the most poignant and spiritual role of Karloff's career.

4. THE MUMMY (1932): Karloff actually gives three performances here: Egyptian High Priest Im-Ho-Tep, a mummy, and Ardath Bey. Three stages in the "life" of a man who is the most romantic of the Universal Monsters. Im-Ho-Tep/Bey wants nothing more than to be reunited with his lost love. Despite a make-up job that restricts his facial movements, Karloff brings out Im-Ho-Tep's longing for his beloved, and his fury at being opposed in his quest. Karloff doesn't rant or rave here; he barely talks above a whisper, and his movements are subtle and compact. Yet one gets the impression that Im-Ho-Tep is someone you don't want to mess with. No matter how outlandish the idea of an ancient mummy coming back to life might be, Karloff makes you believe not by what Im-Ho-Tep does, but by what he doesn't do. Another actor would have done more--Karloff does less. Boris at his creepiest.

5. CORRIDORS OF BLOOD (1958): Not exactly a famous film in the Karloff canon, but a personal favorite. Karloff is Thomas Bolton, a 19th Century British Doctor searching for a viable anaesthetic. Of course, things go wrong. Like THE BODY SNATCHER, this isn't really a true horror film, but it gives Karloff a great late-career highlight. Even though Bolton is the typical well-meaning scientist who goes awry, Boris makes the doctor more than just a cliche. The fact that Karloff was about 70 when he played the role adds to the viewer's sympathy for Bolton. Karloff runs the gamut here--from petty anger at being laughed at by his fellow doctors to suffering from drug addiction. An actor half Karloff's age probably couldn't have handled what Bolton goes through.

There are many, many other films starring Karloff I could have mentioned. I could have put 20 entries in this list. Suffice to say that Boris Karloff is the greatest actor in the history of horror/science-fiction cinema.
Posted by Dan Day, Jr. at 2:20 PM