Timothy Dalton As James Bond--Part One 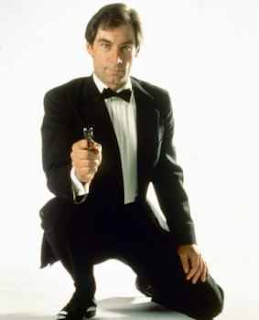 After 1985's A VIEW TO A KILL, it was pretty obvious that Roger Moore's time as James Bond needed to come to an end. Moore was getting too old to play the part, and his version of Bond didn't seem to work anymore. Albert Broccoli and his EON Productions made the decision to cast a new actor in the role.

For the next Bond film Broccoli had wanted to cast Pierce Brosnan, who at the time was known for the American TV series REMINGTON STEELE. The show was going to be canceled, which would have allowed Brosnan to take the role. But suddenly NBC renewed the program for one more year, and Brosnan was contractually obligated to star in it. Albert Broccoli did not want a James Bond who was also doing a TV series, so Welsh actor Timothy Dalton was hired instead.

Timothy Dalton had spent most of his career on the stage, and was virtually unknown to American audiences. He had supporting roles in such films as AGATHA and FLASH GORDON but he certainly wasn't a major leading man. The media played up on the fact that Pierce Brosnan had been "cheated" out of the role, and made it seem like Dalton didn't deserve to be James Bond. Because of this, Dalton's career as 007 was hurt before it even began.

Dalton's approach to the role of Bond was far different than Roger Moore's. Dalton actually read Ian Fleming's books, and he wanted to play Bond in a serious, realistic manner. His debut film, THE LIVING DAYLIGHTS, made a decent amount of money at the box office--but it really wasn't suited to what Dalton wanted his Bond to be.

The problem with the Bond films in the 80s was that they didn't just need a new Bond actor--they needed to have a new creative team as well. Albert Broccoli and his family had of course produced all the Bond films to date. Director John Glen had helmed every Bond film since FOR YOUR EYES ONLY. Screenwriter Richard Maibaum had worked on just about all the films. The James Bond films were complicated productions, and using the same behind-the-scenes talent certainly helped in making them, but it also caused them to be stuck in a rut. By the mid-80s, the Bond series was looking kind of stale next to all the summer blockbusters coming out year after year. Hard-core Bond fans were hoping that Dalton's casting would totally change things.

THE LIVING DAYLIGHTS is an okay film, and Dalton is a lot tougher and more serious than Roger Moore, but it's still your basic "James Bond movie". The action scenes are great (Dalton tried to do most of his own stunts), but the story is confusing. The main villain is Russian General Koskov (Jeroen Krabbe), who is trying to set up the KGB. He's one of the weakest Bond villains. Koskov's partner Whitaker (Joe Don Baker), is an arms dealer who likes dressing up as a army general and playing soldier. Whitaker seems to belong in a 70s Bond movie.

The Bond Girl this time out is Kara Milovy (Maryam d'Abo), Koskov's girlfriend. She's one of the most demure of the Bond Girls. Her relationship with Bond is almost like big brother-little sister. Bond doesn't get much female action this time (Dalton's lack of romance as Bond will be more explored in Part Two of this blog).

One thing that needs to be mentioned about THE LIVING DAYLIGHTS: it has the worst Bond title song EVER, performed by one-hit-wonders a-ha. What the lyrics are, and what they mean, are anyone's guess.

If THE LIVING DAYLIGHTS had been a total series re-boot, more along the lines of 2006's CASINO ROYALE, Dalton's portrayal might be considered one of the best ever. Dalton seems out of place in this film. DAYLIGHTS tries in some ways to be harder than the Moore films, but it doesn't quite get there. Despite having a new, younger, tougher Bond who could have made the series way better, EON Productions still wanted to make the Bond films the same old way.

Timothy Dalton's biggest problem as Bond was that no matter what he did, he was always compared with Pierce Brosnan. The media never let it go, and the general public didn't either. Timothy Dalton was seen as "the other guy"--he still is today.

THE LIVING DAYLIGHTS may not have been the perfect vehicle for Timothy Dalton's James Bond, but his next outing, LICENCE TO KILL, was supposed to be specifically tailored to Dalton's persona. In Part Two, we'll examine the results.