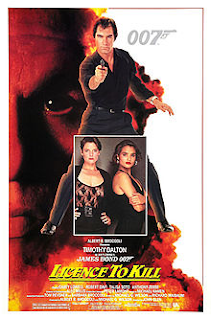 Timothy Dalton's next James Bond film, LICENCE TO KILL(1989), was supposed to be more in line with Dalton's tougher, more serious Bond. The story is straight out of a 1980's action movie playbook: Bond's best friend Felix Leiter has been mutilated by an evil drug lord, and Bond seeks revenge.

The title was originally LICENCE REVOKED, to play up on the fact that Bond goes "rogue" in his quest to get even. The change to a more generic title is just one example of how this film doesn't quite hit the mark.

LICENCE TO KILL has a bit more violence than most Bond movies, but it's still rated PG-13. At this time in the late 80s, action heroes like Schwarzenegger, Stallone, and Seagal were becoming popular. Their films had a level of violence and outrageous action that the Bond films weren't getting to. LICENCE tries to be one of those bloody revenge-laden flicks, but it winds up pulling it's punches.

The idea of Bond going rogue and using his skills for a personal vendetta is a great one. LICENCE doesn't really develop this idea enough. Bond may be breaking the rules by going off on his own and disobeying orders, but he's just killing a bunch of drug dealers. The film never puts Bond in a position to where the audience might object to what he is doing. Gadget master "Q" even shows up to help Bond out--it's as if MI6 sent Q to show their approval of Bond's actions. At the end of the film, Bond seems to suffer no consequences for being on his own.

One big problem is the reason for Bond's revenge. All those who have read the Ian Fleming Bond novels know how important the character of Felix Leiter is to Bond. In the books, CIA agent Leiter is the closest thing to a real friend that Bond has.
In the Bond movies, however, Leiter was always played by a different actor, and the role was never very important. There are probably a number of people who have seen every Bond movie who couldn't even tell you who Felix Leiter is. Because the movie Leiter was never made an interesting character, the emotional impact of what happens to him is diluted. David Hedison (who had played Leiter in LIVE AND LET DIE) was brought in again to try to make Leiter more familiar, but most viewers wouldn't have remembered him.

Drug lord Sanchez is played by Robert Davi. He's good, but no matter how powerful or evil he may be, he's still just a drug lord. James Bond should be fighting bigger villains than drug lords. Sanchez's girlfriend, who winds up helping Bond, is played by Talisa Soto. Carey Lowell plays Pam Bouvier, an associate of Leiter's who helps Bond in his plan to take down Sanchez. Both women are okay, but they are not up to the great Bond girls of the past.

LICENCE is very well made, and has some exciting scenes (especially the tanker-truck chase at the end). But it feels like a big-budget "Miami Vice" episode instead of a James Bond film.

LICENCE TO KILL was made by the now usual team of director John Glen and screenwriters Richard Maibaum and Michael G. Wilson (Albert Broccoli's stepson). If Broccoli and EON Productions really wanted Dalton's Bond to be more like Fleming's creation, they would have gotten different directors and writers for the films. EON Productions still wanted to make Bond films the regular way, and because of that, the series suffered. LICENCE TO KILL didn't do well at the box office. The summer of 1989 saw a number of huge big-time releases: BATMAN, INDIANA JONES AND THE LAST CRUSADE, THE ABYSS, STAR TREK V, etc. LICENCE couldn't compete with these films. It took five years until the next Bond film was made because the series was bogged down in a dispute over which studio owned the rights to the franchise. It probably was the best thing that could have happened. The Bond series was becoming old-fashioned. Having a multi-year gap made film goers miss Bond, and the series was revitalized in 1995 with GOLDENEYE and Pierce Brosnan.

But what about Timothy Dalton?

It's hard to really determine how good Dalton was as Bond. He only appeared in two films, and he never was in a great Bond film. Dalton tried to play Bond as he was in the books, but he wasn't helped by how EON Productions made the Bond films. The movies needed to go in a totally different direction, and this wouldn't happen until 2006's CASINO ROYALE (a film that would have been perfect for a young Timothy Dalton).

Dalton also had to compete with someone who had never even played Bond--Pierce Brosnan. The spectre of Brosnan always hung over Dalton's Bond. Dalton was never really accepted in the role, especially by American audiences.

The general audience never seemed to buy into the idea of Timothy Dalton as James Bond. It has to be said that Dalton may have contributed to this. Dalton is a better actor than Roger Moore and Pierce Brosnan. But Moore and Brosnan have more screen presence than Dalton. The best way to put it is this--when you see Moore and Brosnan, you believe that they ARE James Bond. Dalton comes off as someone who is PLAYING James Bond.

Dalton also never seemed comfortable in the role. His Bond was humorless, and even when given a one-liner, he wasn't good at delivering it. Out of all the cinematic Bonds, Dalton's gets the least amount of female action. When he does have a love scene, Dalton doesn't appear all that excited about it.

Most Bond film fans have never read an Ian Fleming novel in their lives. They have certain expectations for an actor playing the role. The actor has to be tough and cool, but he also has to have a sardonic wit and be a ladies man. The actor playing Bond also has to be likable to the general public. (Daniel Craig is the exception--his Bond is a prick--but that's a post for another day.) Dalton may have been close to the Fleming James Bond, but that did not make him a successful cinematic James Bond.

The final verdict on Timothy Dalton is that he played James Bond 20 years too early. Unlike George Lazenby, Dalton does not have a great Bond film to allow his interpretation of the character to be re-assessed.