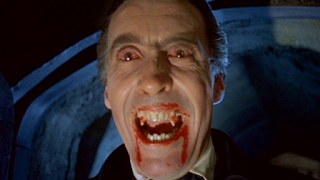 1. HORROR OF DRACULA (1958): Lee's first outing as the Count was a game changer. There hadn't been a movie monster like him until then--one can only imagine the effect this had on late 50s film audiences. Lee's Dracula is still scary even now. No CGI enhanced image can match the power of Lee's feral intensity. He's only in the movie for a few moments, but every single one of them has an impact. It's a cliche' to say that Lee has a "commanding presence", but he does, and it enabled him to inhabit this role like no one before or since (other than Lugosi). Lee went on to play the Count several times, but never again in a production with the overall quality of HORROR OF DRACULA.
Whether Lee likes it or not, Dracula is his signature role.

2. THE MUMMY (1959): The greatest movie mummy of all time? With respect to Boris Karloff, it has to be Sir Chris. His Mummy is not some shambling, slow-moving wreck--it's powerful, quick, and cunning. The old joke about how all you have to do to defeat the Mummy is to outrun him doesn't apply here. This Kharis is one you could believe is dangerous. But it's not just the physical aspect of the role that Lee brings over. Swathed in wrappings and bereft of speech, Lee is still able to show every emotion Kharis is feeling. Just look at Lee's eyes and his body language when Kharis sees what he thinks is his long lost love--no "mainstream" actor could have done any better. A powerful and moving performance--more proof that it's the human, not the make-up or the FX, that makes the monster.

3. THE DEVIL RIDES OUT (1968): Lee is on the good side here, playing the Duc de Richleau. This film is based on British author Dennis Wheatley's novel, a book Lee admired and had in fact suggested that Hammer make into a movie. Even though Lee is the "good guy", he still gives the Duc the same intensity and absolute seriousness he would to a macabre part. Lee's de Richleau is involved in fighting a satanic cult, and we buy into the story because of Lee's focus and attitude. Lee's rigid determination to take all his horror and science-fiction roles seriously, no matter how bad the circumstances, is why he is beloved by so many fans. This film proves that Lee would have made just as great a monster fighter as his close friend Peter Cushing.

4. THE WICKER MAN (1973): Lee plays Lord Summerisle, the head of a pagan community located on an offshore Scottish island. In a way Summerisle is more terrifying than any of Lee's supernatural creations, because Summerisle could really exist (and probably does, somewhere). This is an unusual and disturbing film, not for all tastes. Lee plays the role totally against the grain--and he keeps the audience off their guard the whole time. THE WICKER MAN shows that Lee could do much more than just stand around and look menacing.

5. CORRIDORS OF BLOOD (1958): This is more a historical melodrama than a straight horror film, but Lee steals the show in a supporting part. He plays the sinister Resurrection Joe, a body snatcher who gets involved with Boris Karloff's Dr. Bolton. Dressed in a shabby frock coat & top hat, and at times sporting a Cheshire Cat smile, Lee makes huge impression. He gives Joe a soft-spoken Cockney accent and a quietly dangerous attitude. It's one of those "commanding presence" roles that Lee was (in)famous for, but nobody else could play that type of role better than him.

No other actor has had a career like Sir Christopher Lee, and no one ever will. Can anyone else say that they have been directed by Raoul Walsh, John Huston, Michael Powell, Nicholas Ray, Terence Fisher, Mario Bava, Michael Reeves, Jess Franco, Billy Wilder, George Lucas, Steven Spielberg, Tim Burton, Peter Jackson, and Martin Scorsese?  Can anyone else say they have been appearing in theatrical films for more than 65 years? Lee has been accused of being a stiff and boring actor, but as a performer he is far more complex and talented than his critics give him credit for. The man is a true legend.