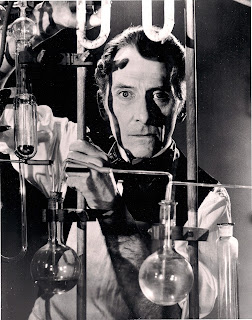 1. THE BRIDES OF DRACULA (1960): Peter's first go-round as vampire hunter Van Helsing was in Hammer's HORROR OF DRACULA, but BRIDES is the character's best showcase. Earlier cinematic monster fighters were usually older academic types paired with a younger leading man. Cushing is a combination of the two--he's smart enough to know all the lore and legend about any supernatural creature, but physical enough to take on any creature in combat. Cushing's Van Helsing was as much a game changer as Christopher Lee's Dracula. The movie motif of the "Fearless Vampire Killer" really comes from Peter Cushing. Whenever you see someone in a film or TV show fashion a cross from various items, or walk around at night with a satchel looking for vampires, they are channeling Cushing. But no one else can bring the authority or determination to monster hunting as Cushing did. He is, hands down, the screen's greatest monster fighter of all time.

2. FRANKENSTEIN MUST BE DESTROYED (1969): This was Cushing's fifth time in the role of Baron Victor Frankenstein--but the Baron was never as cold or cruel as he is here. By the sheer force of his personality, Cushing overpowers everyone else in this film. Nattily attired and icily correct in manner and speech, the Baron is a monster without any make-up. Most actors would have to resort to violent acts or yelling and screaming to put over true evil. Cushing can do it with just a stare or a slight gesture. A truly brilliant portrayal.

3. THE HOUND OF THE BASKERVILLES (1959): Hammer Films' version of Conan Doyle's most famous Sherlock Holmes tale isn't really a horror film, but it counts here. Peter would go on to play Holmes a couple more times, but this is his definitive Holmes performance. One has to remember that there had not been a Sherlock Holmes on the big screen since Basil Rathbone. Cushing's Holmes was far different than Rathbone's--and a lot of people at the time didn't really appreciate it. Many critics give credit to Jeremy Brett for creating a eccentric, complex, "real" Holmes--but Peter Cushing was really the first to do it. Peter's Holmes is all the over the place. He has more energy than Van Helsing and Baron Frankenstein combined--Cushing's way of showing that Holmes' mind is so great he simply can't stay still. Some have said Cushing was too short to play the great detective--but in this film Peter uses that as a plus. He stands right next to the much taller Henry Baskerville (Christopher Lee) and stares right up at him, almost challenging the man with his intellect. How many other actors could take a defect and use it to make their performance better?

4. NIGHT CREATURES aka CAPTAIN CLEGG (1962): Once again, not really a true horror film--it's more of a bizarre adventure (a lot of the so-called "Hammer Horrors" were really just bizarre adventures). Cushing kind of plays a dual role--he poses as the kindly Reverend Dr. Blyss, when he is actually the legendary smuggler Captain Clegg. Clegg/Blyss uses his "parish" of Dymchurch to continue his smuggling activities. Cushing gets a chance to play a swashbuckling anti-hero, and he's fantastic. Peter gives this role a ambiguous quality--as Dr. Blyss, he serves as the village vicar and he seems to genuinely care about his flock. But when the Captain has to take care of business, Cushing's whole attitude changes. Watching Cushing go back and forth between his "roles" is a lesson in screen acting. NIGHT CREATURES is a film which is not as well-known as Peter's other Hammer appearances, but it should be.

5. TALES FROM THE CRYPT (1972): This is one of the many anthology films from Amicus that Peter appeared in during the late 60s--early 70s. In this one he plays Arthur Grimsdyke in the story "Poetic Justice". The problem with anthology films is that because the stories have relatively little screen time, the characterizations have to be somewhat basic. Cushing is still able to make Grimsdyke a fully real person despite the limitations of the anthology format. It's one of the few times that Cushing plays a working class man (and one of the few times Cushing doesn't sport a snappy wardrobe). It's also one of the few times Cushing had to wear "monster" make-up. The role of Grimsdyke could have easily been nothing more than a throwaway--poor old man is driven to death by snobbish neighbors, comes back from the grave to get revenge--but Peter makes Grimsdyke much more than just the set-up to a horror punch-line. Moving and poignant, Arthur Grimsdyke is one of Cushing's finest creations.

Peter Cushing is my favorite actor of all time. In the book "Cult Movie Stars", author Danny Peary called Cushing "The most important and beloved figure of the British horror-fantasy film." There's no doubt about that. When I attended G Fest this year in Rosemont, IL, I wore my Peter Cushing t-shirt. There were people literally walking up to me and shaking my hand--that's how much love and respect Peter Cushing has among horror and science-fiction film fans worldwide.