THE BLACK PIT OF DR. M 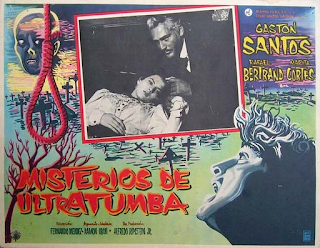 Since Halloween is near, it's time for a blog about a classic horror film--one that not many people have even seen.

The Gothic horror film revival of the late 1950s-early 1960s didn't just involve English-speaking productions--countries around the world joined in as well. Mexico was responsible for a number of chillers. Most of these were shown on American television in badly dubbed and edited versions. They are remembered today for being unintentionally funny more than anything else.

THE BLACK PIT OF DR. M (original title MISTERIOS DE ULTRAUMBA) is an exception to the usual Mexican lot of Aztec Mummies and monster-fighting masked wrestlers. It's dark and atmospheric, with a inventive screenplay. It has enough mist and expressionistic black & white cinematography to satisfy any monster-movie buff.

The story concerns the activities of Dr. Mazali, who convinces his dying associate Dr. Aldama to try to contact him from the afterlife and show him the secrets of the beyond. Dr. M apparently never heard of the phrase "be careful what you wish for". Being that this is a horror film, one can guess how things will turn out.

This film features two night-time burials (each accompanied by a torchlit procession), a sanitarium filled with violent lunatics, a ghost who pops in and out constantly, and a reanimated corpse clawing its way out of a grave. The latter sequence pre-dates a more famous one in Mario Bava's BLACK SUNDAY. And, of course, there is a hot-looking female who gets carried off by a monster at the climax of the film (Dr. Aldama's daughter).

The real scene-stealer here is one of Dr. M's orderlies, Elmer. Poor Elmer gets his face scarred by acid (a very good and gruesome makeup job), and he figures prominently in the resolution. Elmer is played by Carlos Ancira, and he comes off like a Mexican Peter Lorre.

THE BLACK PIT OF DR. M is available on DVD from Casa Negra, who have released a number of fine Mexican horror films to the American market. The DVD has the original Spanish soundtrack with English subtitles. The picture quality is fantastic, giving justice to the fine photography by Victor Herrera.

For those who think that most Mexican horror films are just silly nonsense, THE BLACK PIT OF DR. M will be a revelation. It's just as good as any other Gothic thriller from England or America in the same time period. If DR. M had been made with an English-speaking cast, it would have a far greater reputation. If you are a fan of classic horror films and you have not seen THE BLACK PIT OF DR. M, you really need to seek it out.