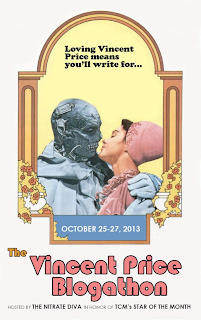 1. THE ABOMINABLE DR. PHIBES (1971): One of the most bizarre & unique films ever made, and a perfect showcase for Price. The horribly burned Dr. Anton Phibes seeks revenge for the death of his beloved wife. Scientist, theologian, and musician, Phibes is a combination of just about every horror role Price played--but the end result goes way beyond all the other roles. Because Phibes is so disfigured, Price is not able to speak his lines normally. Even though we hear Phibes' recreated voice, Vincent has to play the role silent--and he does it magnificently. Take away Phibes' "lines" and we would still know exactly what he is thinking. Making an audience accept the improbable or impossible is a feat every performer in any horror or science-fiction film strives for. It's a feat that is taken for granted if done well--which is why Price still never gets enough credit for what he had to go through to play Phibes.
PHIBES is somewhat campy, and it does have some of the elements that figure into the "Uncle Vincent" persona that made Price a huge public figure in the 70s. But despite all the outre aspects of PHIBES, Price is still able to bring a touch of sadness and righteous anger to the character. In my more than humble opinion. Vincent Price's greatest screen performance.

2. HOUSE OF USHER (1960): There's very little doubt that Vincent Price was the only actor who could properly personify the spirit of the work of Edgar Allan Poe. USHER was Price's first foray into Poe territory, and his first teaming with director Roger Corman and American-International Pictures. Price, Corman, and AIP would go on to make horror film history. White-haired, clean-shaven, and ghostly pale, Roderick Usher is almost a negative image of Price. You feel as if Roderick is made of porcelain--he might crack at any minute. Vincent was made for this role, just as Lugosi was for Dracula and Karloff for the Monster. Price obviously knew how important this role would be for him. His Roderick is light-years away from his work with William Castle. This film made Price into an icon.

3. THE PIT AND THE PENDULUM (1961): AIP's follow up to USHER. Price & Corman out-do themselves to an extent (USHER is ranked higher because it was the first of Price's Poe outings). Vincent's Nicholas Medina is a LOT more emotional than Roderick Usher, but with all the stuff he has to go through, you can't blame him. The last ten minutes are Price at the top of his game. Great to see Vincent together with Barbara Steele.

4. THE MASQUE OF THE RED DEATH (1964): Yes, another Price-Corman-AIP-Poe film. But let's face it, this series represents just about everything people think of when Vincent Price is mentioned. Prince Prospero is probably Price's most evil role (some would choose Matthew Hopkins in WITCHFINDER GENERAL). By this time, Corman and AIP were trying to change the Poe formula. MASQUE was made in England, with a better supporting cast than was usual in the Poe films. Price still dominates--only he could play Prospero. There have been a number of other Poe adaptions over the years, but without Vincent Price, they haven't amounted to much.

5. THE COMEDY OF TERRORS (1963): Many people have accused Price of being campy. He really wasn't most of the time, but it's part of his persona. Actually Price was a very underrated light comic actor (try watching HIS KIND OF WOMAN sometime). In COMEDY OF TERRORS, Vincent gets to show what would have happened if he had worked for Hal Roach or Mack Sennett. Vincent plays Waldo Trumbull, a mediocre 19th Century undertaker. Things are so bad off that Trumbull decides to try and kill the richest man in town (Basil Rathbone) so he can clean up by holding a huge funeral. Unfortunately Trumbull is saddled with a dimwit assistant (Peter Lorre), a senile father-in-law (Boris Karloff) and an annoying wife (Joyce Jameson). Price gets to run the gamut of comic acting here--slapstick, double-takes, slow burns--and he even gets some "drunk" scenes. Price & Lorre are almost a Gothic Laurel & Hardy. Vincent's comic timing is perfect, and he's not being campy....he is genuinely funny.

Vincent Price was somewhat fortunate to wind up involved in the Gothic horror film revival of the late 50s-early 60s. If Price had remained nothing more than a well-respected character actor, he certainly wouldn't have been anywhere near the legend he became. Although accused of being "campy", Price had the talent to make the outlandish real. Very few performers could pull off what Vincent Price accomplished on the screen.


I originally posted this last year, and I decided to contribute it to The Vincent Price Blogathon, currently being hosted by The Nitrate Diva (http://nitratediva.wordpress.com/). If you are a Vincent Price fan, keep an eye on my blog...in the near future I will be writing a post on the new Vincent Price Collection Blu-ray set.