BATTLE OF THE WORLDS 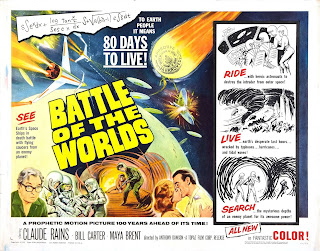 As many of you know, Claude Rains made a memorable appearance in one of the greatest films ever made--LAWRENCE OF ARABIA. The last theatrical feature Rains starred in before LAWRENCE was....BATTLE OF THE WORLDS.

BATTLE OF THE WORLDS is a 1961 Italian science-fiction film. (The original Italian title was IL PLANETA DEGLI UOMINI SPENTI.) Claude Rains plays the irascible Professor Benson, who tries to save the Earth from being destroyed by a rogue planet. I viewed the movie (in a decent print and in widescreen, no less) on YouTube.

The movie begins with an attractive woman running around an exotic seaside location while a haunting melody plays in the background. At first I thought I was watching a perfume commercial, but the lady, named Eve (Maya Brent), is actually on an island where a scientific research center is located. Eve works on the island along with her fiancee Dr. Fred Steele (Umberto Orsini). Fred discovers a strange planet heading straight for Earth. He reveals this to the grumpy Professor Benson, who tells Fred he already knows what is happening through his own calculations. (Benson refers to the planet as "the Outsider".) The planet doesn't crash into Earth, but starts orbiting it instead. The planet has a fleet of deadly flying saucers as a defense system, and Benson and his scientific cohorts must find a way defeat this threat.

BATTLE OF THE WORLDS was directed by cult legend Antonio Margheriti, under his usual pseudonym of Anthony Dawson. Margheriti would go on to direct other Italian sci-fi adventures such as WAR OF THE PLANETS and WILD, WILD PLANET. Those films are far more outlandish than BATTLE OF THE WORLDS. I would even say that most American science-fiction films of the same period are more outlandish. BATTLE OF THE WORLDS has a very straightforward story line, and it doesn't have monsters carrying away damsels in nightgowns. The female characters in the film are dressed rather demurely for a low-budget sci-fi flick--no mini-skirts and high heels--and the women work as equals alongside the men on the island, at a Mars base, and in outer space. The FX sequences are more than adequate for the period. The various shots of the spaceships featured in the story are short and edited quickly, which stops the viewer from getting too good a look at them. Whenever spaceships do appear on the screen, they are backed musically with a strange tonal & choral combination that brings to mind the creepy sound effect used in the original INVADERS FROM MARS.

Claude Rains is without doubt the real star of BATTLE OF THE WORLDS. Instead of going through the motions in a movie that most would consider beneath him, Rains gives the role all he has. His Benson is one of those gruff misanthropes who wind up having more heart than those around him. Rains gets a showcase sequence where he tries to convince the "United Commission" (who he communicates with through video screens) to let him have full power to combat the "Outsider". It's the equivalent of a stage soliloquy. At the climax of BATTLE OF THE WORLDS, Benson joins Fred & Eve on an expedition to the Outsider planet--which allows us to see the 72-year old actor fitted out in a full spacesuit and space helmet. Rains may look out of place in astronaut gear, but it shows how determined his character is to solve the mystery of the Outsider.

The other actors (all dubbed in English in the version I viewed) are okay, but there's no Franco Nero or Barbara Steele in the bunch. (Umberto Orsini does resemble Richard Chamberlain a bit.) There's no main bad guy role either. Take away Claude Rains from BATTLE OF THE WORLDS, and you would have a very different (and very lifeless) film.

What has been written about BATTLE OF THE WORLDS usually falls along the lines of "Poor Claude Rains must have been embarrassed..." Well, Rains had nothing to be embarrassed about. He got lead billing, and he got a juicy role that he could play to the hilt. BATTLE OF THE WORLDS is very cerebral compared to other science-fiction movies made around the same time, which may be one reason why it doesn't have a major geek following. The movie has some interesting concepts, the main one being that the Outsider was the product of a long-dead alien race, and the planet was stuck on a kind of auto-pilot. (The "Dead Aliens leaving the lights on" plot has been used in several famous TV shows and movies.) BATTLE OF THE WORLDS seems to have fallen into public domain purgatory, and one wishes that a company like Kino would release the movie on a restored Blu-ray. (One thing you have to say about Italian sci-fi movies from the 1960s--they certainly were colorful.) BATTLE OF THE WORLDS isn't on the same level as PLANET OF THE VAMPIRES, but it is worth seeking out for science-fiction fans...and especially for anyone who admires the acting ability of Claude Rains.