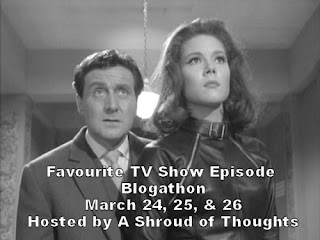 I participated in the "Favorite TV Show Blogathon" (hosted by the great A Shroud of Thoughts blog) a couple years ago. Back then I chose a WILD WILD WEST episode, the debut of Dr. Loveless. This time around, I'm covering an episode of the legendary cult British TV series THE AVENGERS--an episode which stars none other than my favorite actor, Peter Cushing.

"Return of the Cybernauts" is a direct sequel to an earlier AVENGERS episode called, naturally, "The Cybernauts". In that show, the avenging duo of John Steed (Patrick Macnee) and Emma Peel (Diana Rigg) stop a mad scientist named Clement Armstrong (Michael Gough) and his mini-army of destructive robots. In "Return of the Cybernauts". Peter Cushing plays Paul Beresford, who, unknown to Steed and Mrs. Peel, is Armstrong's brother. Beresford is determined to get revenge for his brother's death.

THE AVENGERS remains one of the great cult TV series of all time. Diana Rigg was on the show for only two full seasons, but it is the Emma Peel era that is most remembered, especially by Americans. Trying to describe the quirky, stylized, and adventurous 1960s hip attitude of the show to someone who's never seen it is almost impossible. THE AVENGERS is much better watched than discussed. THE AVENGERS often dipped into the realm of the fantastic, and it was fitting that an actor who played so many roles in the horror and science-fiction genres such as Peter Cushing would appear as a guest star. "Return of the Cybernauts" is a treat for Cushing fans. The actor gets to play a contemporary role (he's still dressed to the nines), and Paul Beresford is different from the usual villain. Beresford is no out-and-out madman--he's someone who can turn the charm on when he needs to, and while he wants to destroy Mrs. Peel, the man can still appreciate the woman's attractiveness.

Beresford is planning to kill Steed and Mrs. Peel--but he wants to do it in a way that makes the duo suffer as much as possible. Beresford has one of his late brother's remaining cybernauts kidnap three prominent scientists. The three men are secreted at Beresford's estate, and are coerced to devise a scheme to eliminate Steed and Peel. Meanwhile Beresford has befriended the duo, who are now charged with investigating the disappearances of the three scientists. Two of the captured men figure out a way to control a person's nervous system and turn that subject into a literal human cybernaut. Beresford gives Mrs. Peel the gift of a bracelet, which contains the control device inside. A similar device (hidden in a watch) is meant for Steed, but he winds up not wearing it...which enables him to save Mrs. Peel from being a zombie, and foil Beresford's plans. 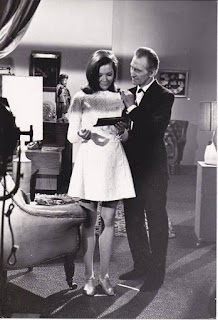 Diana Rigg and Peter Cushing in "Return of the Cybernauts"


The real highlight of "Return of the Cybernauts" is seeing Peter Cushing interact with Diana Rigg. Cushing had very few chances in his screen acting career to use any romantic charm, and here he gets to use it on one of the loveliest women in television at the time. Not only does Beresford kiss Mrs. Peel's hand several times, he even calls her Emma--which almost never happened on any other AVENGERS episode. Patrick Macnee's unflappable John Steed even comments on Beresford's attentions--which causes Mrs. Peel to proclaim that Steed is jealous! Cushing gives the impression that even though Beresford wants to revenge himself on Mrs. Peel, there's other things he'd like to do with her as well. When Beresford is shown that the remote control device works on Mrs. Peel, and she is now under his command, he's almost giddy at the prospect. ("Is there anything more gratifying than the obedience of a beautiful woman?", he satisfyingly exclaims.) In a split second Cushing's Beresford goes from displaying a kindly smile to being coldly calculating and ruthless. Despite the character's villainy Cushing brings style and elegance to the role--Beresford appears to be enjoying his devious antics, and no doubt Cushing enjoyed being in this episode.

"Return of the Cybernauts" was written by AVENGERS veteran Phillip Levene, and it was directed by Robert Day (who recently passed away). Day had directed Cushing in Hammer's SHE in 1965. Day uses a number of unique camera angles and edits in the episode, and he shows the Cybernaut as an almost unstoppable force, and a more than worthy opponent for Steed and Mrs. Peel. The program was first broadcast in the U.K. on 9/30/67, and in the U.S. on 2/21/68.

All of the surviving episodes of THE AVENGERS are fast-paced and entertaining (even the ones without Diana Rigg), but "Return of the Cybernauts" is made even more special with Peter Cushing as guest star. Cushing gained his first major notice as an actor from television, through his work on the BBC in the early 1950s. Due to his being based in England, Cushing never got the chance to participate in the many 1960s American TV shows that now dominate the "Retro" cable channels of today. It would have been fascinating if Cushing had shown up on American networks--my guess is he would have loved to be on one of the many small-screen Westerns that frequented the period. Much of Cushing's work for the BBC is now unavailable, but "Return of the Cybernauts" exists, and it gives everyone the chance to see what this magnificent actor could do with the "Guest starring on a TV show" role.