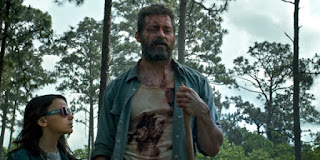 There's been a huge amount of buzz about LOGAN ever since the project was announced, and having now seen the film, I can say that it lives up to the hype. Director James Mangold (who also provided the story) fashions a tale that is unlike any other comic book movie, a tale that has a low-budget 1970s sensibility. I would even go as far to say that LOGAN is the HELL OR HIGH WATER of superhero films.

Set in the year 2029, LOGAN has Hugh Jackman's iconic Wolverine reduced to being a limo driver in a bleak world where mutants are all but extinct. Logan has hidden Professor Charles Xavier out in Mexico--the 90 year old Professor X is suffering from the onset of dementia, and his powerful brain has now become a dangerous weapon. Logan intends to take the Professor and go even deeper into hiding--but he's forced to help a mysterious young girl named Laura (Dafne Keen), a mutant who has a few things in common with the Wolverine. The result is a brutal, bloody tale that has little in common with the CGI fueled comic book spectaculars we've been inundated with over the last decade.

LOGAN has very little to do with the rest of the X MEN movie series, but at the same time the story rests on our familiarity with Hugh Jackman's Wolverine and Patrick Stewart's Professor Xavier. We've watched these fine actors play these roles for the last 17 years, and seeing their characters' condition in LOGAN can't help but make us feel for them. Logan and Xavier have become haunted, broken down old men, merely existing in a world that no longer needs them. I've never taken seriously all those movie awards, but if you are going to give those things out, the performances of Jackman and Stewart in LOGAN need to be recognized. I believe that Hugh Jackman as Wolverine might be the greatest performer/comic book character combination in screen history. (Do I have a list coming up of my favorite comic book movie performances? Mmmmm.....could be...)

Someone else who deserves awards consideration is Dafne Keen as Laura. I don't want to discuss too much about her character, so as not to spoil the film for those who haven't seen it. Suffice to say that the young girl better be prepared to spend her future as a geek icon.

LOGAN has great acting, but it also has a great feel to it as well. Despite being set in 2029, the movie seems far more realistic than superhero films set in the present. There's a texture here, a sense of actual locations. There's no entire city blocks being destroyed, no outlandish villains standing in a hurricane of electrical energy. Some may complain that LOGAN isn't as "fun" as the typical comic book movie, but James Mangold didn't want to make that type of story, and he should get credit for that. There are all sorts of comic book stories, and there should be all sorts of comic book films. Many have compared LOGAN to a Western, and that opinion certainly does apply--in fact, one of the most famous Western movies of all time is heavily referenced in it.

For those wondering how dark the film really is....it is definitely a hard R. This is not a movie for kids, and even some adults might be turned off by some of the things the 11 year old Laura does. There won't be any Happy Meal toys tied to this picture.

LOGAN isn't perfect--despite it's not being a blockbuster, it still lasts more than two hours, and it loses a bit of steam right before the climax. But it has to be ranked among the best of the comic book films. It is a fitting valedictory for Hugh Jackman in his (supposed) last outing as the Wolverine. Jackman's Logan is one of the pillars on which the entire culture of geekdom that rules the entertainment industry has been built, and the actor should be recognized for that. More importantly, LOGAN proves that not all comic book movies have to be the same. Hopefully other directors and writers will take note of this and go out of their way to move the comic book movie genre into different directions.
Posted by Dan Day, Jr. at 8:43 AM