Yes, this is my 500th post. I can't believe I've written so many of these things--and to what end? I sometimes wonder. Nevertheless, I have gotten a great deal of enjoyment out of doing this, and I've made some worthy contacts through the blog. (Unfortunately, I haven't made any money off of this blog....)

I don't plan on ending this blog anytime soon. There's still hundreds of hundreds of movies I haven't even covered yet, and plenty of film topics I haven't discussed. There are times when writing this feels like schoolwork--especially when I agree to participate in a blogathon, and then spend way too much of a weekend fulfilling my promise. But I guess there are far worse things I could be doing.

I really love it when I get feedback on the blog, which is very seldom. A few of my friends have said to me, "Why do you write about so many obscure movies?? Why can't you talk more about movies everyone knows??" For me personally it is far more of a challenge to write about a film that has had very little coverage on it than dealing with famous classics. I have written about famous films such as CITIZEN KANE, but when I do that I feel like I'm wasting my time, because these movies have been discussed so much by so many people who are far more articulate about cinema than I am.

And as for those folks who say, "You don't like anything but old stuff!"--my response to that is, I am what I am. If you want me to get all trendy and start dishing about the latest movies and TV shows, that's not me. Quite frankly, what passes for popular entertainment in the 21st Century doesn't excite me all that much. I'm convinced that the main reason certain movies and TV shows are popular now is because people are talking about them on social media. It's as if actually watching the product is secondary. In a way we've all become bloggers. I certainly can't harp on everyone in the world now becoming a critic--I'm part of the group--but creativity will always be far more important than criticism.

If there are any certain films or movie topics you would like me to cover, please let me know in the comments section. I'll even give you credit when I write the post!


And now, here's a list of the five posts from The Hitless Wonder Movie Blog that have gotten the most views.

1. Evelyn Ankers & Lon Chaney Jr. (posted 7/13/13)
This was written for a blogathon concerning great movie duos. Why, exactly, would this get the most views? I give credit to Svengoolie. Over the last few years on Me TV, Sven has shown just about every Universal horror film Lon Jr. and Ankers appeared in together multiple times. I believe that after Sven shows these movies, people get on the internet and want to know more about the duo's contentious relationship--and my post comes up on the search engines.

2. Happy Birthday To Caroline Munro (posted 1/16/13)
Hey, Caroline Munro is a cult movie legend, so this doesn't surprise me. And I think all the fantastic photos of her I included in the post probably helped as well. 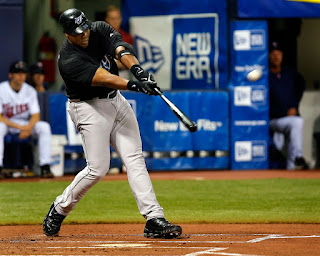 In honor of my 500th post, here's a photo of my favorite baseball player of all time, Frank Thomas, hitting his 500th home run. What does this has to do with movies? Absolutely nothing.

3. You're Braver Than I Thought (posted 3/6/13)
This post was my immediate response to the news that Disney was going to start making brand new Star Wars movies. A interesting thing to read now.

4. DVD Review: THE THREE STOOGES--RARE TREASURES FROM THE COLUMBIA VAULT (posted 1/11/13)
This was about a Three Stooges box set--and the Three Stooges are very, very popular.

5. LITTLE SHOPPE OF HORRORS #30 (posted 6/8/13)
In this post I reviewed issue #30 of Richard Klemensen's fantastic magazine on Hammer Films. Apparently that issue must have been popular--but I also suspect folks were searching on the internet for other things containing to the phrase "little shop of horrors", and this post came up.
Posted by Dan Day, Jr. at 8:49 AM