SLAUGHTER OF THE VAMPIRES

It's time for another obscure black & white Italian horror film featuring the undead. This one comes from 1962, and was originally titled LA STRAGE DEI VAMPIRI--the version of it I viewed had the title SLAUGHTER OF THE VAMPIRES. (The movie is also known as CURSE OF THE BLOOD GHOULS.)

One would assume that a movie called SLAUGHTER OF THE VAMPIRES would have all-out battles between blood-suckers and the living. But the actual story is less ostentatious than that, with very few characters. The plot revolves around 19th Century European newlywed couple Wolfgang (Walter Brandi) and Louise (Graziella Granata), who have taken residence in an old castle. Unfortunately for the pair, a vampire (Dieter Eppler) has decided to hide out in the wine cellar, and he's soon making moves on Louise. Wolfgang is at a loss in dealing with his wife's new sickness, and he goes to get help from the ironically named Dr. Nietzsche (Luigi Batzella), who just happens to be an expert in vampirism (the vampire hunter-vampire ratio in 19th Century Europe must have been enormous). By the time Wolfgang and the Doctor get back, Louise has become a full-fledged member of the undead, and now Wolfgang is next on the list to be converted.

SLAUGHTER OF THE VAMPIRES has an unusual opening scene--we see a male & female vampire on the run from torch wielding villagers, the type of sequence usually shown at the end of a horror film. The female vampire is dispatched by the mob, while the male gets away, to hide in the newlywed's castle after the main titles are shown. We get no backstory whatsoever on the male vampire--he doesn't even get a proper name in the story, so we don't even know if he's a count, a baron, or just a working-class guy. He does wear a red-lined cape and a frilly white dress shirt, so at least he's decked out properly. The bad news is that he also is wearing about 20 pounds of makeup, which makes him resemble either a silent movie actor or a 1970s glitter rock star. With his mediocre facial job, it's hard to take Dieter Eppler seriously as a supernatural menace. 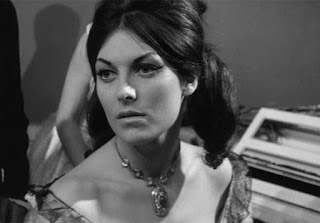 Graziella Granata in SLAUGHTER OF THE VAMPIRES


The real star of SLAUGHTER OF THE VAMPIRES is the raven-haired & voluptuous Graziella Granata as Louise. Because of her predicament, Louise spends a lot of time--do I even have to tell you this?--wandering around in the dark wearing a nightgown. But she looks fantastic doing it, and her vampire has far more flair and energy than Eppler's. In most vampire tales, the entire story revolves around saving a beautiful young woman from being vampirzed, whether it be Helen Chandler, Suzan Farmer, Veronica Carlson, etc. The interesting twist in SLAUGHTER OF THE VAMPIRES is that the young female lead is already lost to the undead before the vampire hunter can get down to business. Right after her transformation, Louise is putting the moves on her grieving husband, and she shows no remorse in doing so.

There's no doubt that SLAUGHTER OF THE VAMPIRES was influenced by Hammer's HORROR OF DRACULA--at one point Dr. Nietzsche emerges from off-screen and sticks a cross in a vampire's face, just like Peter Cushing's Van Helsing did. Dr. Nietzsche has a lot of other things in common with Cushing's Van Helsing, such as going on about how he has spent his life investigating and tracking down the undead. Luigi Batzella certainly can't match Peter Cushing in the acting department, but he does make a good vampire hunter, and he brings a strong mature presence to the film.

Walter Brandi was a very underwhelming vampire in THE PLAYGIRLS AND THE VAMPIRE and THE VAMPIRE AND THE BALLERINA. Here, he gets to play a role that suits him much better, a David Manners-type of character. You feel sorry for poor Wolfgang, but at the same time you can't help but think that the guy wouldn't be able to take out the trash, let alone destroy a supernatural creature.

SLAUGHTER OF THE VAMPIRES was written and directed by Roberto Mauri. Mauri lays on the atmosphere when he can, but the film does drag a bit. Having seen this film on YouTube and on a low-priced Retromedia DVD, I have to wonder how much more appreciation I would have for it if I had viewed it in a pristine condition. (The version I saw was dubbed, which didn't help matters much.) The movie forms a sort of loose trilogy along with THE VAMPIRE AND THE BALLERINA and THE PLAYGIRLS AND THE VAMPIRE, but I would rate those two movies higher because there are more interesting things going on in them (and they also have a lot more gorgeous women). SLAUGHTER OF THE VAMPIRES is an okay vampire flick, nothing more.