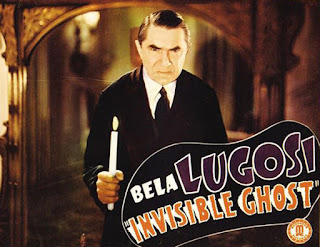 INVISIBLE GHOST (1941) is the first of the so-called "Monogram Nine", a series of films that Bela Lugosi starred in for the Poverty Row movie studio. In my opinion it's also the best, though that isn't saying much. INVISIBLE GHOST has long been a public domain staple on home video, but now Kino has released it on Region A Blu-ray.

Lugosi plays Charles Kessler, a supposedly kindly man who happens to live in a house where a number of unsolved murders have been committed. Years ago, Kessler's wife ran out on him with his best friend. The duo were involved in a car accident, and Mrs. Kessler (Betty Compson) is now a broken-down shadow of the woman she once was. Mrs. Kessler is kept hidden by the Kessler's gardener, but she manages to get out and wander around every so often....and when Mr. Kessler sees her, he becomes so emotionally distraught he goes into a trance and starts killing people!

As you can tell by the plot description, INVISIBLE GHOST isn't exactly the most sensible movie ever made. Kessler and his daughter (played by Polly Ann Young, lookalike sister of Loretta Young) don't seem all that concerned with staying in a house that is frequented by murder. (The local authorities don't seem to have been concerned with investigating any members of the Kessler family.) Apparently Mrs. Kessler has been in hiding for years, yet she manages to go out without anyone seeing her except Kessler. I guess one can understand why Kessler would go nuts on seeing his wife after what she did to him--but why does he kill random people, instead of Mrs. Kessler? There's plenty of other questions that come up when one watches this movie--but it's better just to sit back and accept INVISIBLE GHOST for what it is, a low-budget chiller flick and a prime showcase for Bela Lugosi.

What makes INVISIBLE GHOST the pick of the Monogram Nine litter is the atmospheric direction of Joseph H. Lewis. Lewis would go on to become a film noir specialist with such titles as GUN CRAZY, and he brings some of the attitude of that dark genre to INVISIBLE GHOST. For most low-budget horror movies of the 1930s and 1940s, great direction was simply making sure the principals were in front of the camera and in focus. Lewis goes out of his way to make something out of INVISIBLE GHOST, with all sorts of unique camera angles and specially framed shots. The director uses dramatic lighting to show that Lugosi as Kessler has "turned", and he stages one murder scene by having the camera take the victim's viewpoint as Lugosi moves toward her. INVISIBLE GHOST may not make much sense story-wise, but visually it is above most films of its type.

In the 1940s, Bela Lugosi appeared in a number of horror movies that are now considered better than INVISIBLE GHOST, such as THE WOLF MAN, NIGHT MONSTER, and FRANKENSTEIN MEETS THE WOLF MAN. The thing is, INVISIBLE GHOST gives Lugosi the better role as Charles Kessler. One would expect Bela to ham it up in a movie like this, but he doesn't. He's actually somewhat restrained (for a guy who goes wacky from time to time). Most Bela fans feel that Charles Kessler is one of the actor's best performances from after his heyday in the 1930s. You can say what you want about Monogram, but I believe they did more for Lugosi than Universal or people like Ed Wood.

Kino's Blu-ray of INVISIBLE GHOST looks incredibly sharp for the first and last parts of the film. The middle section of the film is more degraded, with a softer image. Overall, though, Kino's presentation is far and away better than any other version of INVISIBLE GHOST. (While seeing how good the beginning of this Blu-ray looked, I had to wonder...if all of Monogram's films were this fine visually, would we have to totally re-evaluate them?)

The main extra on this disc is an audio commentary featuring classic monster movie expert Tom Weaver. Weaver literally wrote the book on low-budget chillers--POVERTY ROW HORRORS!, published by McFarland. (I got my copy of the book autographed by Tom at a Monster Bash Conference a few years ago.) As usual Weaver entertainingly passes on a ton of info, mixed in with some sly humor. On this talk Weaver brings in a few "guest stars"--Larry Blamire, Robert Tinnell, Gary Rhodes, and Dr. Robert J. Kiss, names that will be familiar to old monster movie geeks. It's one of the best commentaries Kino has produced.

Kino has done an outstanding job with INVISIBLE GHOST, a movie that for years has been relegated to the Golden Turkey lists. The legion of Lugosi fans will certainly enjoy it. If you already have one of those old public domain copies of the movie, you can get rid of it now--this Blu-ray upgrade is definitely worth buying.