THE MAN WHO COULD CHEAT DEATH On Kino Blu-ray 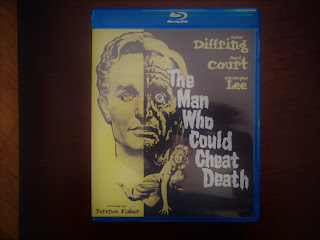 THE MAN WHO COULD CHEAT DEATH (1959) is one of the lesser known entries from Hammer Films. One of the reasons this may be is due to the fact that though Christopher Lee and Hazel Court appear in the film, German actor Anton Diffring is the main star. The film itself is not all that great--but that didn't stop me from buying it again on Blu-ray, this time from Kino under their Studio Classics line. (The movie was released on Blu-ray by Legend Films a few years ago.)

THE MAN WHO COULD CHEAT DEATH, like much of Hammer's early Gothic product, is a remake. After the success of THE CURSE OF FRANKENSTEIN and HORROR OF DRACULA, American studios were lining up to make deals with Hammer, and Paramount signed up the British company to make a new version of a 1944 film called THE MAN IN HALF MOON STREET. That movie was based on a play by Barre Lyndon, and Hammer's Jimmy Sangster adapted the author's work. Unfortunately Sangster didn't change the story too much from its stage origins. THE MAN WHO COULD CHEAT DEATH is a very, very talky film, void of the weird situations Sangster usually came up with for his other Hammer scripts.

Anton Diffring plays Georges Bonnet, a well-to-do doctor and sculptor living in 1890 Paris. Despite Bonnet's classic good looks, he's a distant, mysterious figure..and that's because he's actually 104 years old. Bonnet has prolonged his life through gland transplants, and every ten years he moves to another location, reinventing himself to keep his secret. One of his former flames, a beautiful socialite named Janine (Hazel Court), comes across Bonnet, and attempts to renew their relationship. But Bonnet is more interested in having Janine's friend Dr. Gerard (Christopher Lee) perform the much needed gland transplant. Gerard refuses, but since Bonnet has killed several people over the years, he has no qualms in forcing Janine and Gerard to help him continue to literally cheat death.

Peter Cushing was originally supposed to have played Georges Bonnet, but the actor bowed out, supposedly due to his heavy workload. Personally, I believe that Cushing didn't want to do the film because he wasn't excited about the script (he was no fan of Jimmy Sangster's writing.) Georges Bonnet is the movie's biggest weakness. He's a cold, self-centered, arrogant person, someone that attracts no decent feelings from the audience. At least Peter Cushing's Baron Frankenstein has the excuse that all his disreputable dealings are in the name of scientific research--Bonnet can't even use that angle. Bonnet just wants to go on living forever and having affairs with gorgeous women that he can discard whenever he has a need to. As played by Diffring, Bonnet isn't even a villain you can enjoy watching--the man has no charm, and he doesn't even seem to relish his unnatural life. Since Bonnet is the main character, and he spends most of his time making speeches defending his actions, THE MAN WHO COULD CHEAT DEATH can be hard to get through at times.

Anton Diffring was not a bad actor, but on-screen he didn't have the warmest personality. This made Diffring perfect in the many German military officer roles he played throughout his acting career. Diffring appeared in more than a few other horror films--his best role in that genre was the lead in CIRCUS OF HORRORS. Diffring's mannered coldness was perfect for that over-the-top film. The actor had already starred in a TV adaptation of THE MAN IN HALF MOON STREET (now thought lost) and appeared as Baron Frankenstein for Hammer in the TV pilot of TALES OF FRANKENSTEIN, before he was cast as Georges Bonnet. Diffring just didn't have the unique ability to make a dangerous scientist engaging to an audience, like Peter Cushing. Most monster movie fans wonder how THE MAN WHO COULD CHEAT DEATH would have turned out if it had starred Cushing. I think the movie might have turned out far differently, because Cushing would have asked for major rewrites. (Another reason I feel Cushing rejected the role is that he must have sensed that Bonnet was basically a watered-down version of Baron Frankenstein--and he had played that role twice already.)

Hazel Court looks absolutely stunning in THE MAN WHO COULD CHEAT DEATH, but there's not much to the character of Janine. You wonder why someone as vivacious as Janine would even be interested in a cold fish like Bonnet--Court and Diffring have no chemistry together. During a scene where Janine is posing for a statue being created by Bonnet, a topless shot of the actress was filmed, but it was never included in the American or English versions. That shot (or even a picture of it) is NOT on this Blu-ray...the shot is probably the most famous thing about the movie!

Christopher Lee has the rather thankless role of Dr. Gerard. It's telling that at the time, Hammer never thought about having Lee replace Peter Cushing as Bonnet (that would have been interesting). Lee doesn't get much of a chance to shine, but he gives a fine performance nonetheless. For those folks who are not impressed with Lee as an actor, let me put it to you this way--could you imagine Bela Lugosi playing a "David Manners" type of role?

For whatever reason I never got to see THE MAN WHO COULD CHEAT DEATH on TV during my younger days--I don't even think Svengoolie ever showed it. I didn't actually see the movie until it was released on DVD in the 2000s. Legend later put it out on Blu-ray. Kino's Region A disc has moderately better visual quality, but it still looks a bit washed out. The movie's main color seems to be gold-yellow--even the main titles and the main movie poster (pictured on the disc cover above) are yellow, giving it a different look than most Hammer productions made during the same period. It still has the plush art direction and production design one expects from a Hammer film.

What makes this Kino Blu-ray worthy are the extras. English authors and Hammer experts Kim Newman and Jonathan Rigby give separate discussions on the film, each lasting about 17 minutes. Both men go into the shortcomings of THE MAN WHO COULD CHEAT DEATH, and talk about the state of Hammer Films at the time, Cushing's turning down the role, etc. I could listen to Newman and Rigby talk about Hammer all day long, and I'm sure most fans of the company share that opinion. Troy Howarth provides another one of his fine audio commentaries. I can personally attest to the fact that Troy is a Hammer fan, and the lack of on-screen action gives him a chance to comprehensively discuss the company and the major members of the on-camera and off-camera crew.

THE MAN WHO COULD CHEAT DEATH is not a very exciting film. The wannabe screenwriter inside me can think of so many ways the story could have been improved. One expects more from it--it may not have featured Cushing, but it had aboard most of the other essential members of the Hammer team: director Terence Fisher, cinematographer Jack Asher, Lee, Court, and Sangster.  The real reason I bought this disc was because of the extras. Why would I rebuy a movie I'm not all that particularly impressed on Blu-ray?? Well, that's what movie geeks like me do. THE MAN WHO COULD CHEAT DEATH is more interesting for what it might have been instead of what it is.
Posted by Dan Day, Jr. at 2:55 PM