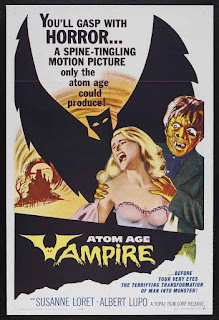 An Italian production from 1960, SEDDOK is one of those "Obsessed Doctor Who Will Do Anything To Restore The Beauty Of A Woman" stories, in the same vein as EYES WITHOUT A FACE, THE AWFUL DR. ORLOF, and CORRUPTION. Like those other films, SEDDOK has a seamy undercurrent. It starts out with a striptease at a nightclub performed by the gorgeous Jeannette (played by Susanne Loret). Jeannette's ship officer boyfriend Pierre (Sergio Fantoni) disapproves of her dancing, and the two argue. Jeannette angrily drives home, and wrecks her car, causing hideous burns on her face. Jeannette believes she has nothing left to live for, but a mysterious woman named Monique (Franca Parisi) visits her in the hospital. Monique convinces Jeannette to visit the secluded home of a Professor Levin (Alberto Lupo) and undergo radical treatment. The Professor is able to restore Jeannette's face, but the effects are only temporary. The Professor, who has become infatuated over Jeannette, turns himself into a horrid monster in order to kill other women that will provide the source needed for a total cure.

This movie, under the title ATOM AGE VAMPIRE, has become something of a camp cult classic. It has all the ingredients to be an effective classic chiller, but it falls short of the mark. Susanne Loret is certainly attractive, but there's a coldness to her beauty, and her character comes off as whiny and self-absorbed. She does look great in a nightgown, though. (You just knew she was going to be wearing one in this type of movie.) Professor Levin seems to fall for Jeannette the very first time he sees her, and it's hard to understand why he would kill for her, especially since the young woman does not reciprocate his feelings. Besides, Levin's assistant Monique (who is very easy on the eyes herself) pines for the Professor. Monique winds up being the first victim to Levin's scheme to revive Jeannette's beauty, a plot element that I think was a mistake. Instead of killing off Monique so early in the tale, she should have been allowed to live (at least till the climax). This would have increased the dynamic between Levin, Monique, and Jeannette, and given more emotional weight to the story. Monique's absence leaves Levin to his own devices....all he has to judge him is a mute sad-eyed servant, who at least has a major role in the end. (Once again, I have to ask....why do so many supposedly brilliant scientists wind up with such lousy help??) 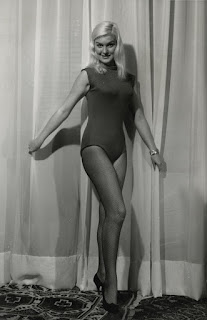 
The Professor is so undone by his killing of Monique that he decides to turn himself into a monster--he feels that this will enable him to take other lives. This brings a "Jekyll & Hyde" element to the story, and since Levin goes out at night and targets ladies of the evening, there's a "Jack the Ripper" aspect as well. The Professor's monstrous state is more goofy than unsettling, but at one point during his first transformation a bit of stop-motion animation is used--an inventive idea. Alfredo Lupo is okay is Levin, but the part needs a Lugosi, or a Carradine, or an Atwill to make it flourish. (It would be very easy to believe that Lionel Atwill would go on a murder spree so he can operate on a stripper.)

The print of SEDDOK that I viewed on YouTube ran about 103 minutes (in Jonathan Rigby's book EURO GOTHIC, the movie's full running time is listed as 107 minutes). The version of this film known as ATOM AGE VAMPIRE runs 80-some minutes. I have to say that the cut-down version might be better. 100+ minutes is very long for this type of movie. Much of the second half of SEDDOK is bogged down by police procedure--old monster movie fans know that whenever an inspector shows up to investigate whatever strange killings are going on, it's time to get some snacks or head to the bathroom. Director Anton Guilio Majano does an adequate job, but the real visual highlights come from the black & white photography of Aldo Giordani. SEDDOK needs a Mario Bava or--dare I say it?--Jess Franco at the helm. Those two directors (among others) would have given the production an extra oomph. By whatever name you call it, SEDDOK/ATOM AGE VAMPIRE reminds me of several other much better horror/science fiction films. 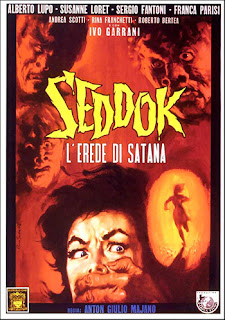