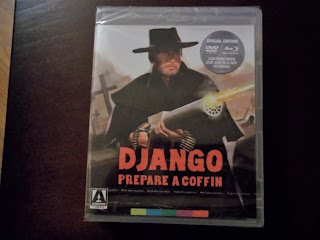 Among the latest of Arrow Video's fantastic releases is the 1967 Euro Western DJANGO, PREPARE A COFFIN, starring Terence Hill as the title character.

The original DJANGO, directed by Sergio Corbucci, was such a success in Europe that dozens of films followed which used (or more accurately, ripped off) the Django name. DJANGO, PREPARE A COFFIN is somewhat of an "official" Django movie--Franco Nero, who first played the character, was going to reprise the role, but he left to appear in the film adaptation of CAMELOT. Nero was replaced by Italian actor Mario Girotti, who used the name Terence Hill. Hill would later become far better known as Trinity in a number of comedic Spaghetti Westerns. (I honestly didn't know anything about DJANGO, PREPARE A COFFIN before it was announced Arrow was putting it out on Blu-ray--so I was amazed to learn that Terence Hill had played two iconic characters of the Euro West.)

Terence Hill bore a resemblance to Franco Nero, and he wears basically the same type of costume Nero wore in the first DJANGO. Hill's DJANGO isn't as morose as Nero's, but the original DJANGO is one of the bleakest movies ever made. DJANGO, PREPARE A COFFIN has the character being set up and robbed by a ruthless politician's gang while accompanying a gold shipment. Django's wife is killed in the melee, and he's left for dead. (It's never made clear if the events of this film happen before or after the first DJANGO--it could essentially just be an early version of a reboot.)

Five years later Django is working as a hangman in the same territory. The men he is hired to execute have been set up by the same gang that attacked Django. Django fakes the executions, and uses the men he has saved from the gallows to take part in his revenge against those who have wronged him. The men in Django's new gang, however, are just as brutal and vicious as the people who set them up, and the usual Spaghetti Western double-dealings and back-stabbings ensue, with another gold shipment involved in the mix. Django does get to use his famous machine gun in the climax, which is fittingly enough set in a graveyard.

DJANGO, PREPARE A COFFIN isn't as violent as the original DJANGO (few films are), but it still has plenty of brutality. Django gets beaten and tortured (most Euro Western "heroes" do), and his gang spends plenty of time and energy bringing vengeance to others. Director Ferdinando Baldi does an okay job, but he's no Sergio Leone (or Corbucci, for that matter). DJANGO, PREPARE A COFFIN is not so much a great Spaghetti Western as it is a representative one. The one element it has that sticks out the most for me is Django's use of a gang--most leading characters in this genre are out-and-out loners. The fact that the gang causes him more trouble than they're worth shows that you can't trust anyone in a Euro Western (Django, of all people, should know this rule). Hill will forever be known for his lighthearted antics as Trinity, but he makes a very good "regular" action movie star. Horst Frank plays the politician behind everything, and he's nowhere near as outlandish as most Spaghetti Western villains. The movie does have a fine score by Gianfranco Reverberi.

Arrow Video has released DJANGO, PREPARE A COFFIN on Blu-ray in 1.66:1 anamorphic widescreen. The image is a bit soft, and like a lot of other Spaghetti Westerns made during this period, the picture has a yellowish tint to it. It's doubtful, though, that this movie could look any better than Arrow's presentation. English and Italian soundtracks are provided in Mono, along with English subtitles. The main extra on the disc is a short interview with Euro Western expert Kevin Grant, who talks about the film and explains the history of the Django character. A very ragged-looking trailer is included, in which the film is named VIVA DJANGO. A 15-page booklet is included, which has an essay about the film's production history by film historian Howard Hughes, and stills from the movie. Arrow's release also has a DVD version of the movie. As usual with Arrow product, the title sleeve has reversible artwork.

DJANGO, PREPARE A COFFIN is not a great Western, or even a great Spaghetti Western, but it is entertaining and interesting for those who favor the genre. Seeing Terence Hill play Django before he played Trinity is at least worth a look for cult movie fans. Once again I have to commend Arrow Video for doing excellent work on a title that would usually be relegated to public domain purgatory.