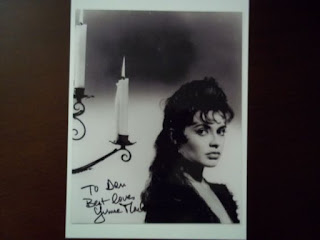 I felt I just had to write a blog post on the passing of French actress Yvonne Monlaur. She played the role of Marianne Danielle in the Hammer Film Gothic masterpiece THE BRIDES OF DRACULA, one of my favorite movies of all time. She also appeared in two other famous classic horrors--CIRCUS OF HORRORS and another Hammer production, THE TERROR OF THE TONGS.

During the height of her career Monlaur was constantly compared to screen sex goddess Brigitte Bardot. In her three horror films, however, Monlaur projected a naive innocence--she was more a maiden in need of rescue. Her character in THE BRIDES OF DRACULA is a sweet, trusting individual, a young girl so overwhelmed by the dark situations she experiences that she becomes easy prey for the handsome vampire Baron Meinster. The color cinematography of Jack Asher and the typically gorgeous Hammer costumes (nightgowns included) made Monlaur look spectacular. Director Terence Fisher made much use of Monlaur's beautifully expressive eyes (if there was any actress who could do a perfect wide-eyed horrified stare, it was Yvonne). Untold numbers of monster movie fans fell for Yvonne while watching BRIDES, and all of them wanted to see her saved by Peter Cushing's intrepid Dr. Van Helsing. Monlaur's damsel in distress characterization may be seen as politically incorrect in the age of social media demand of "strong" female roles, but it was perfect for the world of Gothic horror cinema.

There's also a special reason why Monlaur's role in THE BRIDES OF DRACULA is important. There's a Hammer fan theory that Marianne and Van Helsing get together as an actual couple after the events of BRIDES. In later Hammer Dracula films, we meet Van Helsing's modern direct descendant, so he had to have hooked up with someone. There's also the fact that at the end of the film, Van Helsing and Marianne are locked in an embrace. Whenever I watch BRIDES I always feel that there is a subtle attraction between Van Helsing and Marianne, so it makes sense that Monlaur's character had a far bigger role in the Hammer universe.

I, and my good friend, independent filmmaker Joshua Kennedy, had the great honor of meeting Yvonne Monlaur at the October 2014 Monster Bash Conference in Mars, Pennsylvania. My first impression of her was how small in stature she was....but she was also a kindly person, and she was very nice to Joshua and I. She even spoke French to us (we both got a kick out of that). When she spoke to us about Peter Cushing, she had so much admiration for him, she looked as if she was going to cry. Later on at the Bash, she participated in a Q & A forum, and she told a number of stories about her life and career. She seemed to enjoy herself at this event. 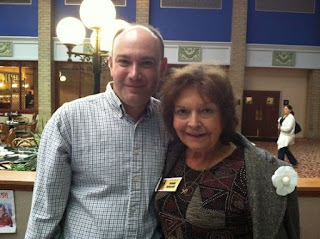 It was a huge deal for me to meet this woman--as I've stated before, THE BRIDES OF DRACULA is one of my favorite movies of all time. It's my favorite Hammer film, my favorite Peter Cushing performance....and Yvonne Monlaur was the leading lady in it. She was the true definition of a classic Scream Queen, and she will always live on in the hearts of Monster Movie Geeks everywhere.
Posted by Dan Day, Jr. at 2:47 PM