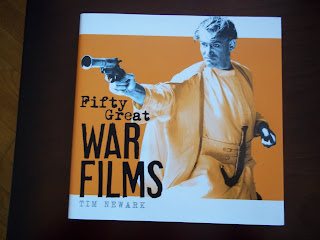 Osprey Publishing is well known for their voluminous catalog of books on military history. Name any conflict in world history, and Osprey has probably put out a title covering it. Now the company looks at cinematic dramatizations of wars past in FIFTY GREAT WAR FILMS.

FIFTY GREAT WAR FILMS, written by military historian Tim Newark, might better be called FIFTY VERY GOOD WAR FILMS. There's more than a few titles picked by Newark that I wouldn't call "great"--such as BEHIND ENEMY LINES. Newark includes a lot of fictional stories set in WWII, such as 633 SQUADRON and VON RYAN'S EXPRESS, but neglects to cover much better fact-based films on the conflict such as SINK THE BISMARCK. There's only one silent film selected: THE BATTLE OF THE SOMME, a documentary made up of mostly actual combat footage. This means you won't find THE BIG PARADE or WINGS in this book.

Another good title for this book would be FIFTY GREAT MODERN WAR FILMS, because 32 of the 50 films deal with World War II. As a matter of fact, there are no films covered which deal with a war before the 20th Century. You won't find any Civil War movies, or films set during the Napoleonic Era, which is surprising.

Each of the 50 films gets a brief critique and overview which lasts a few pages. Stills and poster reproductions for the movies are spread throughout the book. As usual with an Osprey title, the book has a very neat & efficient design.

FIFTY GREAT WAR FILMS is a okay little book--it's only 7 3/4 x 7 3/4 inches in size--but I think it is written in mind for military buffs who are not movie fanatics. The author's analysis of the titles is decent but very generalized--if you are a major film expert you probably won't find out anything new. I got FIFTY GREAT WAR FILMS on sale from Edward R. Hamilton Booksellers. I was hoping that it would be a bit more comprehensive in scope. I feel that the list of movies in this volume is more representative than definitive.
Posted by Dan Day, Jr. at 12:28 PM