THE SKULL On Kino Blu-ray 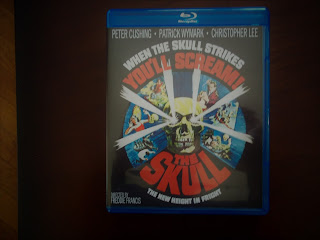 THE SKULL (1965) is one of the Peter Cushing/Christopher Lee horror movie team-ups, although Lee is really more of a guest star (he's even listed in the credits as such). The movie was produced by Amicus, the company that was the main rival to Hammer Films, and it was directed by legendary cameraman Freddie Francis. Kino has just released the film on Region A Blu-ray.

Amicus is best known for their many anthology horror movies such as THE HOUSE THAT DRIPPED BLOOD. THE SKULL, however, centers on just one tale. Christopher Maitland (Peter Cushing), an expert on and collector of the occult, comes into possession of the actual skull of the infamous Marquis de Sade. Maitland believes that his occult studies give him insight into why people fear the unknown, but the man has no idea what is in store for him as the skull begins to exert its deadly power.

THE SKULL was based on a short story by Robert Bloch entitled (naturally) "The Skull of the Marquis de Sade". I read the story when I was a teenager, and there's not much to it--I think it's about 15 pages long. Amicus producer Milton Subotsky adapted Bloch's story to feature-length, but according to Freddie Francis the script was still too short. Francis' solution was to give the movie as many visual highlights as possible. The director and cinematographer John Wilcox fill the Techniscope widescreen frame with all sorts of carefully composed shots (this movie should be used as a guide for young filmmakers on how to use widescreen). Francis takes Maitland's study, which is filled with various exotic knick knacks, and turns it into a miniature haunted house, with the use of expert camerawork and lighting. Not only does the movie have very little plot, it has very little dialogue as well, enabling Francis to tell the story in visual terms. This extenuates the fantastic elements of the tale, whereas more plot & dialogue might have diluted them.

The biggest visual highlight of all is the POV shots from "inside" the skull. Francis had a large mock-up of a skull's face attached to the front of a camera, and while the effect may be a bit obvious it works rather well. Francis would reuse this technique for the monster in THE CREEPING FLESH (another Cushing/Lee movie), and he even did it as a cinematographer in David Lynch's version of DUNE. 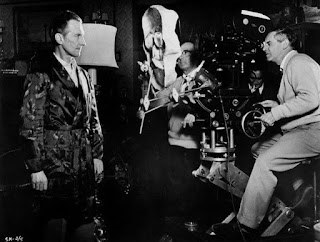 How the POV shots of THE SKULL were achieved

Francis was helped immeasurably by his lead actor Peter Cushing. During most of the film Maitland is by himself, which means Cushing had to convey to the audience the character's situation without dialogue or the help of other actors. As usual, Cushing comes through--what other actor could emotionally react to a fake skull rigged up with wires and not come across as ridiculous? This is one of Cushing's best performances in any movie. Maitland is an academic, but he's not a Baron or a Doctor from another period in history. He's a modern man, a man who's confident that his knowledge of the occult puts him above superstition. He finds out very quickly that he doesn't know as much as he thinks (most of Robert Bloch's short stories have protagonists who realize too late how naive they are).

THE SKULL has an amazing supporting cast. Christopher Lee makes the most of his small role as Maitland's friend and fellow collector, a man who once owned the Marquis' skull and knows all too well its destructive power. Patrick Wymark just about steals the film as Marco, the disreputable dealer who sells Maitland the skull. Very small roles are filled by the likes of Nigel Green, Patrick Magee, Jill Bennett, Michael Gough, and Peter Woodthorpe. These actors may not have much screen time, but their combined talents make THE SKULL feel even more impressive.

Despite the fact that it's a short story with a lot of padding, THE SKULL is one of the best films Amicus ever made. The combination of Freddie Francis' visual flourishes and the expert playing of Peter Cushing and the supporting cast show that it is possible to take a slight script and make more out of it than what is written down on the page.

I first saw THE SKULL when it was shown by Svengoolie (he was "Son of Svengoolie" back then) sometime in the early 1980s. Of course in those days it was shown in pan and scan, and THE SKULL cannot be fully appreciated in this manner. Legend Films released THE SKULL on DVD and then Blu-ray in the 2000s. Kino's Blu-ray release is a bit better in the picture quality department, but the colors still look somewhat faded (that may have to do with the fact that it was filmed in Techniscope).

Kino features some enticing extras on this disc. Hammer experts Kim Newman and Jonathan Rigby give separate talks on the movie, each lasting about a half-hour. The two authors each discuss the real Marquis de Sade, the background and history of Amicus, and other relevant details. An audio commentary is provided by Tim Lucas, editor of the now late and lamented VIDEO WATCHDOG magazine. Lucas is one the best home video commentators and he gives THE SKULL a comprehensive examination. I'm sure I've seen THE SKULL more than a dozen times over the years, yet Lucas pointed out a number of things I never noticed. There's also a "Trailers From Hell" segment on THE SKULL which has director Joe Dante sharing his thoughts on the movie.

I have to assume that if you are interested in a movie like THE SKULL, you probably own it already on home video. I would rate this Kino release as a worthy buy due to the extras.