WOMAN OF THE YEAR On Criterion Blu-ray 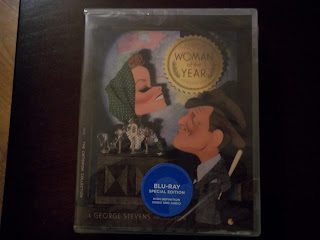 One of the greatest romantic comedies of all time gets the Criterion treatment. WOMAN OF THE YEAR (1942) is the very first collaboration between screen legends Spencer Tracy and Katherine Hepburn, and many believe it is the best.

When one watches WOMAN OF THE YEAR, it's hard to believe that Tracy & Hepburn had never even met one another before they appeared in this film. Their chemistry together is perfect, and they work so naturally together you'd think they had been doing it for years. They remained an on and off screen couple until Tracy's death in 1967.

It doesn't take an intellectual with a film studies degree to articulate why Tracy & Hepburn were one of the best movie couples. The Midwestern-born, plain-spoken Tracy and the East Coast high-brow Hepburn were the ultimate example of opposites attract. Spencer Tracy is one of my favorite actors, but I have to admit that I've never been a huge Katherine Hepburn fan. I've always respected her acting talent, which was considerable....but she was too theatrical for me, too contrived, too....Hepburnish?? But Tracy made Hepburn appealing, and Hepburn made Tracy seem romantic. Tracy was also a strong enough personality to put Hepburn in her place, and Hepburn was a strong enough personality to give it right back to him.

The storyline for WOMAN OF THE YEAR seems fairly generic today--regular guy sportswriter and internationally renowned political columnist fall in love, and deal with the realities of being together. Literally hundreds of other movies and sitcoms have used the same premise since. It's what Tracy & Hepburn--and director George Stevens--do with the material that separates it from the many imitations that would follow. The comic timing in this film is amazing. Tracy's facial reactions are on a level with those of Oliver Hardy.

If there is a detriment to WOMAN OF THE YEAR, it may be the climax, which has Hepburn disastrously trying to prove she can be a "proper" wife to Tracy. I'm sure many viewers today with a certain political agenda might grit their teeth while watching the ending. Many of the extras on the Blu-ray point out that this climax was filmed to replace another sequence because a number of female members in the test audiences felt Hepburn needed to be knocked off her high horse. I find the ending funny, but I think it kind of misses the point--Hepburn's character's problems at being a wife have little to do with whether she can cook.

What makes Criterion's Blu-ray of WOMAN OF THE YEAR a must-buy are the numerous extras included. The disc features two full-length documentaries: GEORGE STEVENS: A FILMMAKER'S JOURNEY, and THE SPENCER TRACY LEGACY: A TRIBUTE BY KATHERINE HEPBURN. I feel A FILMMAKER'S JOURNEY is worth the price of the Blu-ray alone--it is one of the best examinations of a classic American movie director's career I have seen. THE SPENCER TRACY LEGACY is important because it was hosted and narrated by Hepburn, and it showcases many film clips from throughout Tracy's film career.