UNCLE WAS A VAMPIRE 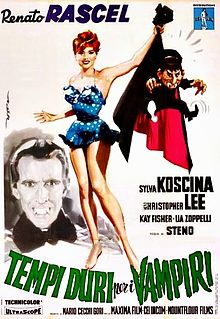 Soon after his game-changing portrayal of Dracula in Hammer's HORROR OF DRACULA, Christopher Lee played another vampire role--in an Italian comedy. Filmed in 1959 under the original title of TEMPI DURI PER I VAMPIRI, the movie was known in America as UNCLE WAS A VAMPIRE.

For Christopher Lee fans, UNCLE WAS A VAMPIRE is something of a revelation. Lee definitely isn't playing Dracula--the bloodsucker in this film has the florid name of Baron Roderigo de Braumfurten. But Lee's appearance in this film is almost exactly what he would look like in the many Dracula films he made for Hammer in the 1960s-1970s. Baron Roderigo has a red-lined cape, which Lee would have in the later Dracula films. Roderigo's hairstyle in also very much in line with what Lee's Dracula would sport. Roderigo is a bit paler and thinner than the Hammer version of Dracula, but for me he looks almost exactly like Lee did in DRACULA, PRINCE OF DARKNESS (1966).

Roderigo also resembles Lee's Dracula in other ways. Many of Lee's facial reactions, his physical mannerisms, and his body language in UNCLE WAS A VAMPIRE would show up again in the Hammer Draculas. The way Roderigo shoves someone out of his way, the way he closes a door in haste, the way he reacts to a cross--all these actions will be familiar to anyone who has viewed Lee's "official" Dracula movies. Seeing Lee going through all these motions in this context is rather strange--it's like discovering a lost Hammer film.

UNCLE WAS A VAMPIRE also anticipates the later Hammer Draculas in the way in which Lee is used. Baron Roderigo doesn't have a lot of screen time, and when he is not onscreen, his presence is sorely missed. Lee is the sole reason to watch UNCLE WAS A VAMPIRE. There are some beautiful women present, including Susanne Loret, the hottie from ATOM AGE VAMPIRE, but the comedy aspect of the story is very tepid.

The movie begins with an atmospheric sequence in which a horse-driven hearse (much like the ones used in Hammer movies) rides through a forest resembling Black Park. But this isn't the 19th Century--the story quickly shifts to present-day Italy, where the forlorn Baron Oswaldo (Renato Rascel) has just sold his castle to a group that plans to turn it into a resort hotel. Oswaldo has to use the money from the sale to pay off back taxes, leaving him broke--so he becomes a lowly bellhop. Oswaldo soon receives a letter from a mysterious uncle, informing him of an upcoming visit. It's Baron Roderigo, who, unaware of the sale of the castle, plans to use it for his new home. Oswaldo quickly learns that his Uncle is a vampire, and attempts to ward him off, but he's bitten--and the milquetoast nephew starts biting every female in the castle, sending them into swoons of ecstasy. All is resolved in the climax--even Baron Roderigo gets a happy ending.

The biggest problem with UNCLE WAS A VAMPIRE is that it just isn't all that funny (at least from my outlook). The version of this film I watched was dubbed in English, so maybe the comedy might have come across better in a subtitled cut, but I doubt it. Renato Rascel is very low-key as Oswaldo--a Lou Costello type would have worked better in the role. Rascel is so short, even the women in the film tower over him, so his vampiric state comes off as a kid dressing up for Halloween. (It doesn't help that the vampire Oswaldo kind of looks like Joe Pesci.) The comedy in UNCLE WAS A VAMPIRE is on the level of a 1960s TV sitcom, more silly than funny. During Rascel's antics, I kept waiting for Christopher Lee to show up again. 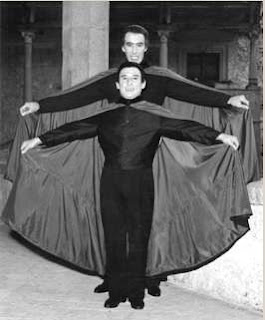 
For what it's worth, Lee does play Roderigo straight, much in the way Bela Lugosi and Co. acted in ABBOTT & COSTELLO MEET FRANKENSTEIN. Due to his towering screen presence, Lee commands every scene he's in (not that he has much competition with the rest of the cast). Director Stefano Vanzina does give Lee some atmospheric moments. Oswaldo's castle was an actual location, and seeing Lee skulk about it in the night, instead of the usual Hammer sets, is a true highlight. Unfortunately, as in many of his European film appearances, Lee is dubbed in the English version by someone who uses a generic "spooky" voice backed by an echo chamber.

It would be nice to see an uncut restored version of UNCLE WAS A VAMPIRE with subtitles. I don't think it would make the movie significantly better....but it would help. If you are a major Christopher Lee fan, and have not seen UNCLE WAS A VAMPIRE, you really need to. It qualifies almost as a "lost" Lee vampiric performance. It has many similarities with some of Lee's Hammer Draculas--too many scenes not relevant to the story, beautiful women to look at (if you're so inclined), and not enough Lee. It's not a great piece of work, but Lee made many films that were far worse.