Book Review: MISSION--JIMMY STEWART AND THE FIGHT FOR EUROPE 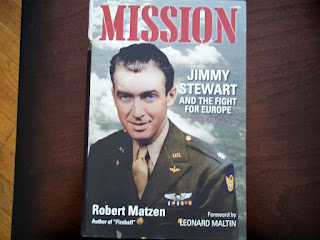 This January I reviewed Robert Matzen's excellent book on the tragic plane crash that took the life of Carole Lombard as she was returning from a War Bond Rally. Matzen's latest work also involves a Hollywood legend and World War II. MISSION--JIMMY STEWART AND THE FIGHT FOR EUROPE details the actor's WWII service as a Army Air Force bomber pilot over the skies of Europe.

James Stewart's father served in World War I, and he had ancestors who served in the American Civil War. This family history gave Stewart a strongly-held belief in service to one's country. Stewart had been fascinated by flying ever since he was a young boy, so it was only natural that when America entered the war the actor became determined to fly in combat. Matzen details that in order for Stewart to get his wish to serve overseas, he had to not only fight the MGM front office, but the U.S. Army as well. Early in 1941 Stewart had won the Best Actor Oscar for THE PHILADELPHIA STORY, and MGM didn't want to lose its investment in him. The Army was afraid of the repercussions if Stewart would be killed, or shot down and captured by the Germans and used as a propaganda story. Stewart was also considered too old (33 at the time of Pearl Harbor) and too thin to become a crack military pilot.

Nevertheless, Stewart, like many of the characters he portrayed on screen, persevered against great odds and got what he wanted. Stewart went from stateside flight instructor to squadron commander, group operations officer and wing commander, flying B-24 Liberators for the legendary Eighth Air Force. Stewart spent 16 harrowing months flying bombing missions.

Matzen briefly covers Stewart's life before and after WWII, but the main thrust of this book is the actor's war service. Matzen gives the reader full insight in what it was like to be a crew member on a B-24 Liberator, and how deadly each single mission was (many crew members died in accidents that had nothing to do with combat). One thing the author makes very clear is the freezing temperatures the B-24 crews had to endure flying at such high altitudes--several WWII dramatizations and books overlook this fact.

As someone who has never served in the military, it's hard for me to fathom the physical and mental strain James Stewart must have suffered. Instead of worrying about flubbing a line on a movie set, Stewart was now a commanding officer in a situation where one mistake could mean the difference between dozens of men living or dying. After the war Stewart would refuse to talk publicly about his experiences, but there's no doubt that the anguished characters he often played in his post-WWII movie career are a reflection of what he went through.

Despite James Stewart's assumed "aw shucks" demeanor and his small-town background, Matzen reveals that the man was far more complicated. Matzen writes that Stewart was "....a quiet, high-strung loner who fought feelings of inadequacy and self-doubt." Matzen contends that Stewart was far more of a ladies man in 1930s Hollywood than most people realize. The author also mentions that Stewart was unsure whether he would be able to successfully act again on the screen after the war ended.

What comes across the most in Matzen's book is that James Stewart was not just a movie star or a war hero, but a real human being--which makes his accomplishments on the screen and in battle even more impressive. James Stewart is one of my favorite actors of all time, and I've read many books about him. I was somewhat familiar with his war record, but MISSION is now the ultimate word on the subject. After reading it my admiration for Stewart grew even more, if that's possible. The book will appeal to both film & military history buffs.
Posted by Dan Day, Jr. at 1:06 PM