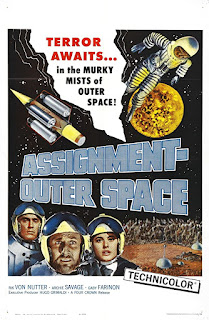 ASSIGNMENT: OUTER SPACE is a 1960 Italian science-fiction film, directed by Antonio Margheriti. I viewed it on the Tubi streaming channel. The version I saw had an American International Pictures logo at the beginning, and an English voice track and credits. (Margheriti was credited with his usual pseudonym, Anthony Dawson.)

In the year 2116, reporter Ray Peterson (Rik Von Nutter) is assigned to cover a story on a space satellite. Upon his arrival Peterson receives a frosty reception from the satellite's crew and its commander (David Montresor), who think that the reporter will just be a nuisance. Peterson saves the satellite's navigator, Lucy (Gabriella Farinon) from injury, and the two are instantly attracted to one another, further antagonizing the commander, who also has an interest in the girl. Those on the satellite learn that a wayward spaceship, Alpha Two, has re-entered the solar system, and is on a collision course for Earth. Ray goes along on an attempt to destroy Alpha Two, and he winds up landing on and entering the craft in order to stop it.

ASSIGNMENT: OUTER SPACE doesn't have anywhere near the flash and flair of the later sci-fi entries helmed by Antonio Margheriti. The movie tries to take a realistic approach to what it would be like to live and work in outer space, but it is hindered by some desultory special effects work and generic characters. Ray Peterson is more annoying than heroic--for a guy that lives in the 22nd Century, and has been in space several times, and is a reporter to boot, he doesn't seem to know all that much about what it is going on around him. He's constantly asking basic questions about everything, which enables the crew of the satellite to explain to him--and the viewer--what is going on. The actor who plays Peterson, Rik Von Nutter, isn't helped by being dubbed, but he's not exactly all that magnetic on the screen to begin with. (Von Nutter would go on to be one of the least-remembered men who played James Bond's friend Felix Leiter in THUNDERBALL.)

This movie has only one major female character in Lucy, and she doesn't wear any skimpy futuristic costumes--she spends all of her time in common work clothes or a space suit. Love triangles would be a recurring theme in Antonio Margheriti's science-fiction features, but in this story it seems contrived, since Peterson and Lucy fall for each other having barely met.

The person who catches one's attention the most here is a space veteran named Al, played by a black American actor (and Broadway dancer) named Archie Savage. Al is wise and philosophical, and he acts as sort of a mentor to Ray. Having any black male play a major role in any science-fiction movie made during this period was unusual, let alone the role of an intelligent, competent individual. One wishes that the film revolved around Al.

Despite all the outer space incidents depicted in it, this movie is still very talky, with plenty of interior scenes. The special effects look more like toys than models. The wild, otherworldy aspects one sees in other Italian science-fiction films are absent here. There's no aliens, or uncharted galactic realms, or any real villains. The Alpha Two spaceship that is supposed to be a threat to all humanity isn't very impressive, and Ray attempts to shut it down by using some good old-fashioned wire cutters. There are a few good ideas here, such as Ray and the crew of the spaceship taking him to the satellite being put into hibernation during the trip. The viewer isn't given much of an idea what society in the 22nd Century is like, except for hints that a world order is in charge. While in space, all the characters are assigned a letters and numbers combination code, and this is displayed quite prominently on the backs of their uniforms. In my mind this made them resemble inmates in a prison. For some reason all the scenes in outer space are in black & white.

ASSIGNMENT: OUTER SPACE was the first film that Antonio Margheriti would receive full credit for directing, and his style--and choice of subject matter--would get much bolder as time went by. Margheriti would follow this movie up with BATTLE OF THE WORLDS, a much better science-fiction tale (I wrote a blog post on it a couple years ago). It was with a series of features about a space station called Gamma One that Margheriti's imagination and creativity would really flourish. ASSIGNMENT: OUTER SPACE just isn't as riveting as Margheriti's later works.