CURSE OF THE UNDEAD On Blu-ray From Kino 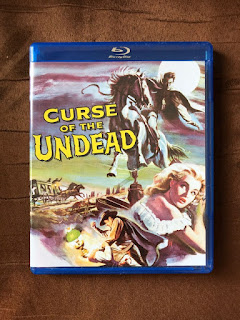 CURSE OF THE UNDEAD is a Horror-Western, made by Universal and released in 1959. I first saw it on the "Son of Svengoolie" program back in the mid-1980s. One would expect a title like this to be included in one of Shout Factory's recent Universal Horror Blu-ray sets, but it gets a release on its own, courtesy of Kino Lorber.

In the late 1800s, somewhere in the American Southwest, a small town is undergoing a series of mysterious deaths. The victims (stop me if you've heard this before) have tiny puncture marks on their necks. Dolores Carter (Kathleen Crowley) has other problems--her family's ranch is being threatened by the land-hungry Buffer (Bruce Gordon). After Dolores' father and younger brother are killed, she seeks out a gunman to settle the score, much to the consternation of her boyfriend, the town preacher (Eric Fleming). A mysterious, black-clad stranger named Drake Robey (Michael Pate) comes to Dolores' aid. Preacher Dan doesn't trust Robey, especially when he does some sleuthing and finds out that the gunslinger is one of the undead. Robey wants more from Dolores than just her blood, and it all leads to a showdown between him and the preacher.

One automatically assumes that CURSE OF THE UNDEAD is somewhat silly, due to the mixing of totally different genres. But it comes out better than expected, considering that it is very low budget. Director and co-writer Edward Dein provides some notable set-ups, and he avoids any tongue-in-cheek humor.

The leading attribute of CURSE OF THE UNDEAD is Michael Pate's portrayal of Drake Robey. Pate is by far the most charismatic member of the cast. His Robey has a cocky gunfighter vibe, but he also has a sense of tragedy about him, explained by a flashback which reveals how he became a vampire. Pate's Robey isn't totally evil--he appears to have feelings for Dolores, or at least he desires her. He's also the only one in the story that stands up to typical Western bad guy Buffer. Pate's vampire is a bit different than other earlier screen incarnations of the undead, in that he can still move around in daylight, cast shadows, and still pine for a normal life. Michael Pate's Drake Robey is a big-screen vampiric performance that should get more respect.

The rest of the cast is filled with the type of actors one sees cropping up on various classic TV shows on MeTV every day--Kathleen Crowley, Bruce Gordon, Edward Binns, John Hoyt, and so on. Eric Fleming, who had just started on RAWHIDE when he made this, gets stuck with the "David Manners" role, and instead of heroic, he comes off as stuffy and disagreeable. (It makes sense that Dolores appears to be attracted to Drake Robey.)

The MeTV vibe extends to the movie's style--it's black and white, and filmed on generic Western sets and locations. (If you came into the middle of the picture, without knowing what it was about, you'd think you had stumbled onto an episode of an old TV show.) Despite that, it's an intriguing tale, particularly for fans of vampire cinema.

CURSE OF THE UNDEAD is presented in 1.85:1 widescreen on this disc, and the picture quality is quite sharp. The sound is excellent as well, bringing out Irving Gertz's ulta-spooky music score.

The main extra on this Blu-ray is a new audio commentary by Tom Weaver. As expected, it's filled with facts and trivia, and by Weaver's remembrances of his personal interactions with the director and members of the cast. (For whatever reason, Weaver seems to be a bit snarkier than usual this time around.) A few guests make vocal appearances on the talk, including David Schecter, who discusses the film's music. An extensive image gallery is included (ironically almost none of the advertising artwork reveals that the story is set in the American Old West). A few trailers for other Kino horror/sci-fi Blu-rays are also here.

CURSE OF THE UNDEAD is one of the last films made by Universal on its lot that dealt with Gothic horror elements. It certainly isn't on the same level as the monster classics made by the company in the 1930s and 40s, but it is effective, and the gunslinger-vampire angle makes it stand out.