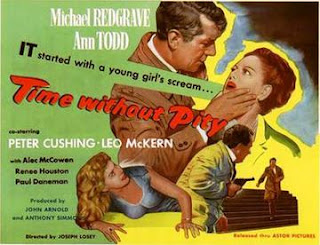 Out of all the films that Turner Classic Movies is showing this October in honor of Peter Cushing being their Star of the Month, the only one I had never seen was TIME WITHOUT PITY. This is a 1957 black & white melodrama directed by Joseph Losey, with a very distinguished cast.

Things are not going very well for failed writer David Graham (Michael Redgrave). He's just gotten out of a sanatorium in Canada, where he was undergoing rehabilitation for his alcoholism, and he was without contact with the outside world. Back in London, he finds that his estranged son Alec (Alec McCowen) is going to be executed in 24 hours for murdering his girlfriend! Graham gets little help from his son's lawyer (Peter Cushing), so the man decides to do some investigating on his own. He learns that his son had a friendship with the family of Robert Stanford (Leo McKern), an overbearing automobile magnate. Graham is desperate to find something that will clear his son, but the young man won't open up to him, and the Stanford family has plenty of secrets of their own. The real obstacle is Graham himself....can he keep himself sober, and focused, on the almost impossible task at hand?

The "Lead character has only 24 hours to save someone from being executed for a crime they didn't commit" plot has been used in several movies and TV shows. TIME WITHOUT PITY gives a unique spin on this plot due to the character Michael Redgrave plays and his performance. David Graham is a fidgety, out-of-sorts fellow, which is understandable due to the circumstances that he is dealing with. The suspense in this tale comes from the fact that the viewer doesn't believe that Graham isn't going to be much help to his son whatsoever.

Graham meets a number of eccentric people during his short odyssey, including Robert Stanford's not-so-dutiful wife (Ann Todd), the auto magnate's lover (a sultry Lois Maxwell) and her flighty mother (Renee Houston), and his son's girlfriend's sister (an unrecognizable Joan Plowright in her big screen debut). Hammer fans will notice Richard Wordsworth and Peter Copley in very small roles. (Even though he's playing a "normal" person, Wordsworth still comes off as creepy.) Due to the heavy dramatics of the story, most of the acting is overwrought, particularly from Leo McKern. A pre-credits scene lets the audience know what really happened to Alec's girlfriend, but even from that standpoint McKern comes off as rather obvious.

Joseph Losey and cinematographer Freddie Francis (billed as "Frederick") make effective use of real-life London locations, but they also add in such artistic touches as plenty of reflective surfaces and several clocks (as to be expected in a story such as this). The bit-of-a-twist ending is surprising, if downbeat. But it fits the film rather well, since the entire affair is downbeat.

As for Peter Cushing....even though he gets fourth billing, he has very little screen time overall, and he spends most of it reacting to Michael Redgrave. Cushing does give a solid, low-key performance--he's a model of restraint compared to the other actors in the film. But I wouldn't call this role a major event in Cushing's movie career.

TIME WITHOUT PITY is well-done, and it has some suspenseful elements to it. I liked it, but I wouldn't go out of my way to watch it multiple times.