THE APE On Blu-ray From Kino 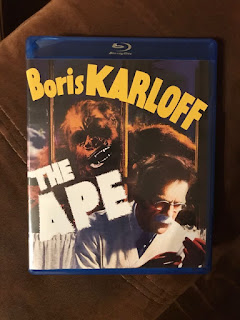 In the late 1930s, Boris Karloff signed a deal with low-budget Monogram Pictures to star in a series of films concerning the exploits of a Chinese detective named Mr. Wong. Karloff's last film in the contract wound up being a horror film: 1940's THE APE, just released on Region A Blu-ray from Kino Lorber.

Karloff plays Dr. Bernard Adrian, a researcher in a small town who is shunned by the local population. Adrian is determined to find a cure for polio--his own wife and daughter died from the disease, and the only person who is friendly to him, a beautiful young neighbor (Maris Wrixon), is suffering from it. When a circus comes to town, an animal trainer is mauled by a gorilla. Adrian uses the victim's spinal fluid in his quest for an antidote. The antidote appears to work, but Adrian needs more of it--and after he kills the gorilla when the beast breaks into his laboratory, the doctor comes up with the idea to use the creature's pelt and disguise as it, that way he can kill others for more spinal fluid. Needless to say, things don't work out too well.

THE APE isn't as whacked-out as most Monogram horror product from the 1940s, but it still has its moments. For whatever reason, the townsfolk can't stand Dr. Adrian right from the get-go (at the beginning of the film, a bunch of bratty kids throw rocks at the doctor's house, and this is way before he starts to try to kill anybody). The story bends over backwards to make Adrian a sympathetic figure--the local citizens are for the most part dim-witted rubes, and the one person the doc does kill is an absolute louse. Karloff helps the film immeasurably with his low-key, committed performance. At the time THE APE was made, Karloff was playing a lot of mad (or at least determined) scientists--in a series of science-fiction films at Columbia, and in BLACK FRIDAY at Universal. Those movies and THE APE share some similar features, such as an elderly-looking Karloff dealing with test tubes, looking through a microscope, jotting down notes, etc. (Boris played so many overreaching scientists during this period that one wonders how he was able to differentiate between all the scripts.)

The ape in THE APE was played by gorilla suit veteran Ray "Crash" Corrigan", and, no, he doesn't for a minute make you think you are watching a real animal. (No matter what you think of it as a story element, the "Guy running around in a gorilla suit" sub-plot lasted a long, long time.) The movie only lasts about an hour, which is just as well (the story wouldn't have held up too well much longer than that). The two writers credited, Curt Siodmak and Richard Carroll, came up with much better material in their careers. Director William Nigh was a poverty row mainstay by this time, but he had directed Lon Chaney during the silent era.

Kino's presentation of the black and white THE APE is quite sharp, especially considering this is a Monogram picture (this certainly isn't a cheap public domain transfer). An image gallery is included, along with two different audio commentaries. One may wonder why a movie like THE APE deserves two commentaries, but I believe Kino must have realized that some special extras were needed for a hour long low-budget black and white film that can easily be accessed on YouTube.

Tom Weaver's commentary has plenty of info and dry humor, as he tries to make sense of THE APE's plot machinations. Richard Harland Smith's talk focuses mainly on the careers of those who worked on the picture. After listening to both, you'll know all you need (and more) about THE APE.

Is this Blu-ray worth buying? If you are a Boris Karloff fan, and a fan of this type of material, yes. Monogram's poverty row horrors have gotten a lot of flack over the years, but in my opinion Kino is doing a service for film buffs in giving some of these productions a proper presentation.